An Alaskan cruise is the setting for amateur detective Sadie Hoffmillers latest adventure. Sadie plans to spend time relaxing with her two grown children, Breanna and Shawn, and her boyfriend, Pete, while enjoying the luxury and cuisine of an elegant cruise ship and helping to plan her daughters upcoming wedding. But even as the crew prepares to leave port, Sadie has suspicions about the voyage ahead and the relationship between her normally easygoing son and a mysterious female passenger he obviously knows but refuses to discuss.

When the woman is discovered unconscious during the second night at sea, Sadies apprehension escalates. Over the last few years, Sadie has developed an extreme dislike for secrets and it would seem her son is keeping one from her. 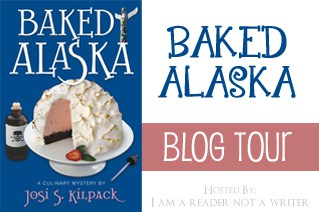 Sadie Hoffmiller is a mother of two adult children who likes to do a little detective work on the side.  She decides to take a cruise with her children and her boyfriend, Pete, so that they can get to know each other better.  Unfortunately the cruise starts off with Sadie finding an unconscious woman on the ship's deck.

From there Shawn, her son, tells her about a secret he's been keeping from her that threatens to jeopardize their close relationship.  Her daughter is struggling to plan a wedding but her mother-in-law wants to turn the small wedding into an over the top affair.  Put that together with Pete wanting to get married and Sadie is getting more then she bargained for in this mystery!

I like how strong and determined Sadie is as a main character.  She wants what's best for her children and while she's protective, she also knows when to back off.  I do think she's a little too nosy for her own good and she pries into the lives of some of the on board passengers to the point that they end up screaming at her!

The neat thing about this book is that there is more than one mystery to solve.  Several different things are going on during the cruise and Sadie and Pete both have a hand in figuring out all of them.  Pete tends to take the more direct route by speaking with the head of security and getting in touch with his contacts while Sadie likes to do the digging around herself.  The pair compliment each other wonderfully and it's fun to see how well they get along.

I will say that this mystery kept me guessing until the end.  There were a lot of minor characters to keep track of and some of them ended up playing major roles in the end.  The book closes with all the mysteries being solved and a new romance budding.  It's a fun read for cozy mystery lovers!

An added bonus to the book is that there are several different recipes included in this book.  As an avid cook this was one of my favorite things about the book.   I liked how the author had the characters talk about a food item and then she ended the chapter with a recipe.