It's hot outside.  Not that I'm complaining because I'd rather it be 90 degrees then 30 degrees.  I can't stand the cold.  I just get irritated that the summer is when I have some time off and can really get cooking and baking but I hate turning the oven on because it heats up the house.  No we do not have air conditioning.  We do have ceiling fans, and they do help, but when it's hot and humid no one wants to be in the kitchen cooking. 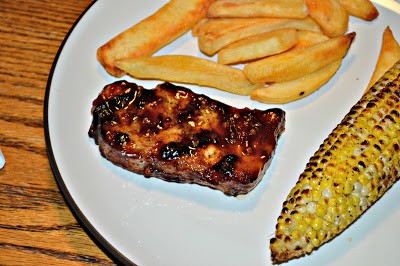 So in the summer we grill a lot.  Well, let me rephrase that.  I prepare the food and my husband does the grilling.  It's not that I can't grill, because I can, but it's just that he's so much better at it and it works well having me do the prep work and him cook the actual food.  This week #SundaySupper is having a Summer BBQ Party so I thought I better bring something hot off the grill!

While I like marinating meat before we grill it, I don't always remember to do so.  Last night was one of those nights.  I was busy all day and it just slipped my mind.  Thankfully I went onto my Cook's Illustrated account and found grilled pork chops that were basted with a sauce while they were cooking.  The sauce sounded delicious to me but I was worried it would be too sweet for Frank.  However, after I cooked it up on the stove and it thickened, it was absolutely delicious.

The flavor was slightly sweet but had a tangy, smokey flavor to it.  I really liked it.  I divided the sauce in half, using half to baste the pork chops and the other half to serve on the side.  My husband ended up really liking the sauce.  It's similar to a homemade BBQ sauce, but even better.  I can't wait to try it on chicken next time! 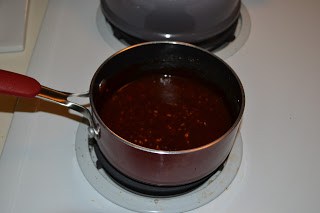 1.  Combine all the ingredients in a small saucepan over medium high heat.  Bring the sauce to a boil then reduce the heat to low.  Simmer for 5-7 minutes or until the sauce has thickened.

2.  Remove the sauce from the heat and divide into two bowls.  Place one bowl in the refrigerator until you are ready to use it. 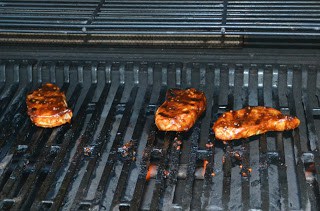 4.  Serve with the remaining sauce on the side. 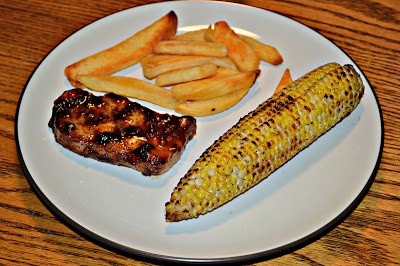 Check out what everyone else is sharing for our Summer BBQ Party:

Hot Off the Grill:

Join the #SundaySupper conversation on twitter each Sunday. We tweet throughout the day and share recipes from all over the world. Our weekly chat starts at 7:00 pm ET and you do not want to miss out on the fun. Follow the #SundaySupper hashtag and remember to include it in your tweets to join in the chat. Check out our #SundaySupper Pinterest board for more fabulous recipes and food photos.