Do you ever look in your pantry and wonder why in the world you bought something?  I've been thinking that a lot lately.  I recently decided to clean out the pantry and I found 3 boxes of Stove Top Stuffing, a can of black eyed peas, a can of cheddar cheese soup, and several single serve bags of chips.  I didn't really know what to do with most of it but I also didn't want to throw it away. 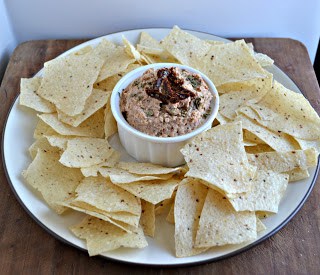 Staring at the can of black eyed peas I wondered how they would taste in place of the chickpeas in hummus.  Feeling I had nothing to lose I went ahead and made a batch of hummus.  It was decent but I felt it was missing something.  Looking through the pantry I found some sun-dried tomatoes.  Thinking they might pair well with the hummus I chopped up a few and added them in.  It was perfect. 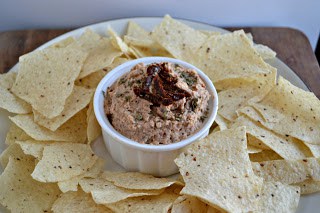 The hummus was smooth and full of flavor from the garlic, lemon juice, spices, and sun-dried tomatoes.  I usually eat my hummus with pita bread but I thought this version went well with tortilla chips.  If you don't like sun-dried tomatoes, either eliminate them completely or substitute some roasted red peppers instead.

1.  Place all of the ingredients in a food processor.  Process until smooth.

2.  Taste the hummus and adjust the salt and pepper if needed.  If hummus is too thick add in a few teaspoons of olive oil. 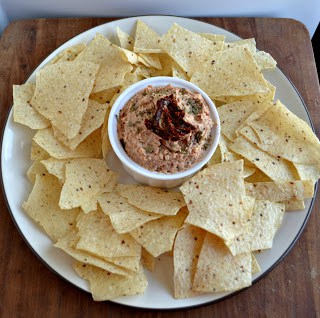