I love the look of stuffed poultry rolls.  They are so messy to make but they look amazing once they are cooked and sliced.  This week at the market turkey breasts were on sale so I bought a couple of packages.  I knew I had seen a recipe in Cooking Light for stuffed turkey breasts and couldn't wait to make it.  The original recipe calls for pancetta but I was unable to find any at the two grocery stores I went to this week.  Those are the disadvantages of living in a very small town. 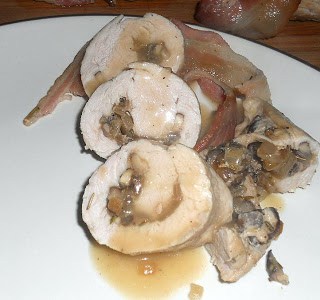 I also rolled the turkey breasts starting at the small side instead of the long sides.  It worked fine and the stuffing stayed inside the roll.  They rolls themselves were not pretty to look at straight out of the oven but they looked gorgeous once they were sliced open.  The turkey was moist and juicy.  The stuffing was savory and delicious.  The porcini gravy even thickened perfectly.  The combination of flavors was tasty and perfect for a cool night.  This is a recipe that could easily be made for company that looks impressive but doesn't take a whole lot of work. 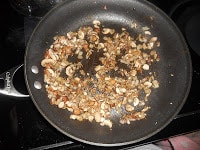 1.  In a small bowl combine the porcini mushrooms and the boiling water.  Cover and let stand for 15 minutes.  Drain the mushrooms over a bowl, reserving the liquid for later.

2.  Chop the porcini mushrooms and set aside.

3.  In a large skillet over medium high heat cook the bacon for 2 minutes on each side.  The bacon will be pink but not fully cooked.  Remove to a paper towel.

4.  Leaving the bacon drippings in the skillet, add the shallots, rosemary, salt, and pepper.  Cook for 5 minutes or until the shallots are tender. 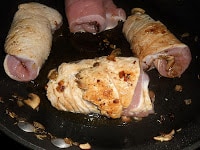 5.  Stir in the mushrooms and garlic and cook for an additional 2 minutes.

7.  Place the turkey breasts in between plastic wrap and pound to ½ inch thickness.  Spread ¼ of the mushroom mixture on the turkey breast and roll up jellyroll style.  Sprinkle each roll with salt and pepper.

8.  Heat 1 teaspoon of olive oil over medium high heat in the pan that held the mushroom mixture.  Carefully add the turkey rolls to the pan cooking for 5-7 minutes or until they rolls are browned on each side.

9.  Add in the carrots, celery, and wine.  Bring to a boil and cook until liquid is reduced by half.  Stir in the reserved porcini liquid.  Remove from heat. 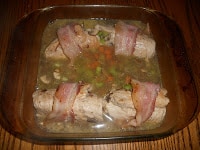 10.  Place each of the bacon strips in a 9 x 9 baking dish.  Carefully set a turkey roll on top of each bacon Pour the cooking liquid, along with the carrots and celery, over top of the turkey rolls in the dish.  Bake for 40 minutes.

11.  Remove the baking dish from the oven and turn the oven temperature to 400 degrees.  Pour the liquid from the dish into a sieve over a bowl to collect the liquids.  Discard the solids. 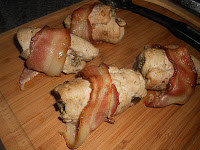 12.  Return the baking dish with only the turkey rolls to the oven for 10 minutes in order to crisp the bacon.  Remove from oven and let rest for 5 minutes.  Slice each roll into 4-6 pieces.

13.  Meanwhile, combine ¼ cup of water and the flour in a small dish.  Whisk until smooth.

14.  Pour the baking liquid into a medium saucepan and cook over medium heat.  Slowly add in the flour mixture while whisking.  Bring to a boil.  Cook for 1 minute or until thickened.  Serve gravy over top of turkey slices. 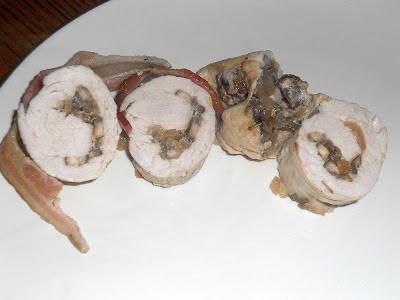