The instant I saw this recipe I was sold.  If there are two things my husband enjoys it is bacon and bourbon.  I thought the bourbon molasses glaze sounded delicious.  I was a little nervous about cooking bone in pork chops.  I've eaten a few dried out chops in my time and I didn't want that to happen to these.

The pork chops are browned in a skillet and then placed in the oven with the sauce.  The sauce thickens as it cooks and the Dijon mustard whisked in it gives a bite to the sweet molasses.  The bacon adds a saltiness that cuts through the molasses and brings out the bourbon flavor.  Frank and I both enjoyed the pork chops.  They tasted like something we would order out at a restaurant. 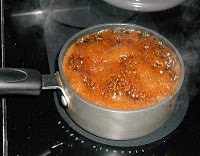 2.  In a small saucepan whisk the molasses, bourbon, salt, and Dijon mustard over medium high heat until it begins to boil.  Reduce the heat to medium low and boil for 8-10 minutes or until the sauce reduces to ½ cup. 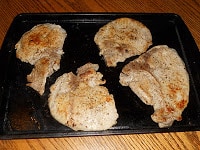 3.  Cook the bacon in a large skillet until it is crisp.  Drain on paper towels and crumble.  Remove all but 1 tablespoon of bacon drippings from the pan.

5.  Bake for 8-10 minutes.  Drizzle with the remaining sauce and top with bacon. 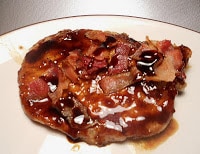 This recipe is featured at: 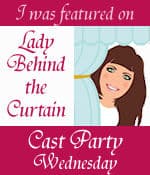