It's almost football season and you know what that means!  It's time for tailgating and watching the Pittsburgh Steelers!  Whenever I think of tailgating I immediately think of grilling burgers and hot dogs.  Often times we just grill them up, slap them on a bun, and put ketchup or mustard on them.  This year I wanted to make a fancier burger that was still worthy of eating before or during a football game. 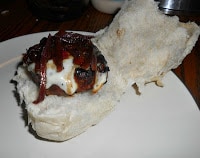 Enter the bacon onion jam.  Just the sound of it had me salivating.  Crispy bacon, thinly sliced red onions, and lots of balsamic vinegar simmered into a thick jam.  I made the jam early in the morning before it got too hot in the house and put it in the refrigerator until it was time to serve it.  Just throw it in a cooler before you leave and put it on your burger the last minute it's on the grill.

The onion jam made all the difference in the world with our burgers.  The burger on its own was juicy but topped with provolone cheese and the onion jam it was amazing.  The jam is slightly sweet, slightly salty, with a rich balsamic flavor.  It's delicious and would be great on pork or chicken as well.  I'll be keeping this one on file for future cookouts.

1.  In a heavy-bottomed large skillet, cook the bacon over medium heat until lightly browned but not  crispy, about 6-8 minutes. Remove the bacon to a paper towel and drain.

2.  Pour off all but 1 tablespoon of the bacon fat.  Add the onion to the bacon fat and cook for 3-5 minutes.

3.  Add a tablespoon of water to the skillet and scrape up any browned bits from the bottom.  Cook for an additional 5 minutes or until the onions begin to brown. 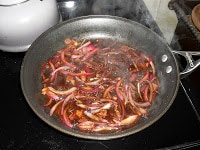 4.  Add the vinegar, Dijon mustard, water, and black pepper.  Place the bacon back in the skillet as well and bring to a boil.

5.  Simmer for 5 minutes or until the liquid has thickened.  Pour into a bowl and allow to cool.  Cover and refrigerate until ready to serve.  Reheat before serving. 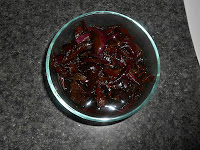 7.  In a large bowl combine the ground beef, Montreal steak seasoning, Worcestershire sauce, and A-1 sauce.  Form into 3 equal patties.

8.  Grill over direct heat 5 minutes each side or until the burgers are cooked through.  Place a slice of provolone cheese on top of each and allow the cheese to melt.  Remove the burgers to a separate plate.

9.  To assemble place the burger on a bun and top with the warmed bacon onion jam. 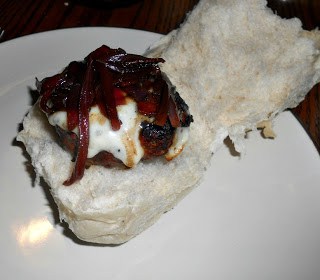