Can you imagine anything more delicious then a graham cracker crust filled with fluffy cheesecake and apples?  What if it was topped off with homemade caramel?  I made this cheesecake for Thanksgiving and it was such a hit I know I'll be making it again for Christmas. 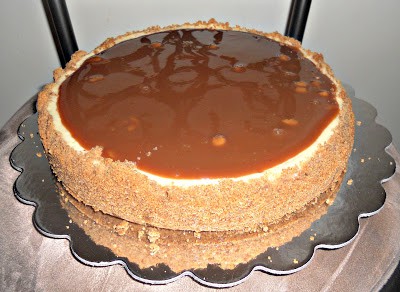 This cheesecake is lighter then many others I have made because it uses ⅓ less fat cream cheese and Greek yogurt.  I also used a vanilla bean to increase the flavor of the cheesecake.  A layer of apple pie filling is placed in the bottom of the crust and then the cheesecake is baked on top of it.  Finally homemade caramel is poured over the top.

The rich, smooth cheesecake goes perfectly with the sweet apples, as well as the sweet and salted caramel.  More caramel can be added to the top of each piece of cheesecake if desired.  I loved this cheesecake and can't wait to make it again for the holidays!

2.  In a mixing bowl combine the ground graham crackers, melted butter, cinnamon, sugar, and salt.  Mix with a fork until evenly moistened. 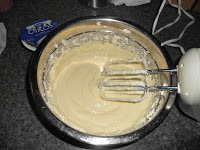 3.  Press the graham cracker mixture into the bottom and up the sides of a 10 inch springform pan.  Bake in the oven for 6 minutes.  Remove and let cool.

4.  Place tablespoons of apple pie filling on top of the graham cracker crust making sure to almost completely cover the bottom.

5.  In a large bowl beat the cream cheese on low speed for 1 minute.  add in the eggs and continue to beat on low.  Gradually add in the sugar and beat until creamy.  Increase the speed to high and add in the cinnamon, ground cloves, nutmeg, vanilla, vanilla bean seeds, and Greek yogurt.  Mix well. 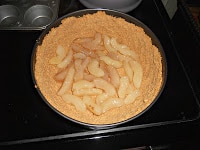 6.  Pour the cream cheese filling in the pan on top of the apple pie filling.

7.  Bake in the oven for 45-50 minutes.  The cheesecake will jiggle lightly in the center.  Remove from the oven and allow to cool in the pan for 30 minutes.  Chill in the refrigerator for 4 hours.

8.  Remove the cheesecake from the pan by releasing the springform bottom.  Keep refrigerated until ready to serve. 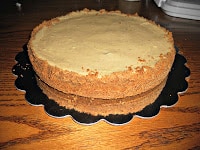 9.  To make the caramel sauce place the sugar and water in a medium saucepn over medium high heat.  Bring the caramel to a boil.

10.  Boil on medium high until the sugar is dissolved and turns a deep amber color, about 10-12 minutes.

11.  Once the caramel has turned the shade of amber desired remove from heat and carefully add the evaporated milk.  It will boil hard and sputter so be careful.  If the milk is added too quickly the caramel will run over top of the pan. 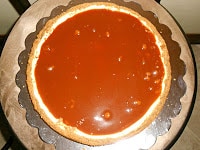 12.  Stir the caramel constantly until the milk is combined and it has stopped boiling.  Add in the vanilla and salt and mix well.  If part of the caramel seems hard, place it in the microwave for 30 seconds to soften it up.

13.  Let the caramel cool in the pan.  Pour into a jar and place in the refrigerator until ready to serve the cheesecake.

14.  When ready to serve the cheesecake, pour the caramel sauce over top and allow to sit for 5 minutes before cutting.  Serve with additional caramel sauce if desired. 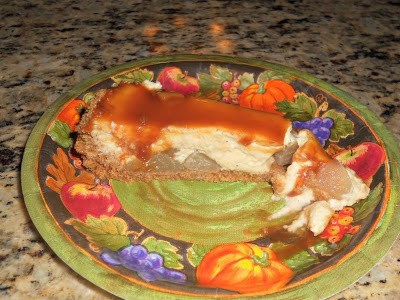