I was planning on making chicken and dumpling soup later on in the week but my husband wasn’t feeling well so I moved it up to make him feel better.  I have my chicken soup down pat but the dumplings I’ve made in the past had either fallen apart or been way too doughy.  I recently saw a recipe that promised big, biscuit like dumplings so I gave them a try. 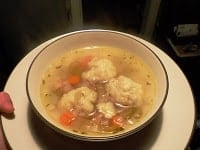 I sauteed the vegetables in garlic and oil, then I added the broth and let it simmer for an hour.  I mixed up the dumplings and they were thick.  I popped them into the simmering soup and let them simmer for 10 minutes.  They got huge and fluffy!  These dumplings are a homerun and added a nice bit of seasoning and texture to a delightful chicken soup.  It’s a great soup for a cold winter night but it’s also light enough to eat if you aren’t feeling well. 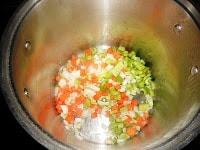 1.  Begin by heating the oil over medium heat in a stock pot.  Add the garlic and onion and saute for 3 minutes, stirring occasionally.
2.  Add the carrots and celery and saute for 5 minutes.  Sprinkle with thyme and pepper and mix.  Slowly add in the chicken broth and water.  Stir in the chicken then bring to a boil.
3.  Once the soup reaches a boil reduce heat to simmer and cover.  Simmer for 1 hour. 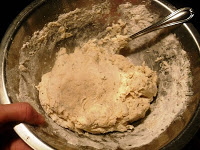 4.  Meanwhile, mix the flour, baking powder, and salt in a bowl.  In another bowl mix the salt, melted butter, and warm milk.  Slowly mix the milk mixture into the flour until just combined.  Stir in the parsley and pepper.
5.  Roll the dumpling dough into 1 inch balls (makes about 30).  Drop the dumplings into the simmering soup and cook for 10 mintues.  Makes 16 cups of soup.
Note:  The soup can be frozen for up to 4 months in a freezer bag or an air tight container without the dumplings in it.  Thaw soup when ready to use then mix up a new batch of dumplings. 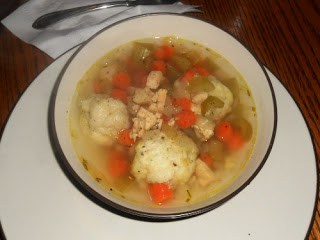