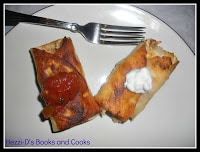 They call me the chicken and cheese girl.  Before I met my husband I didn't eat fish, I didn't eat seafood, I didn't eat tofu, and I didn't eat hardly any red meat.  I pretty much ate chicken...a lot.  I've changed my tune since then and I eat tofu, I'll have some red meat once a week, I eat tilapia, but I'm still not a fan of seafood.

Although I eat a variety of foods now, my favorite thing to make and eat is still chicken and cheese.  My husband on the other hand believes everything tastes better with bacon so this recipe for chicken, bacon, and cheese taquitos was made for the two of us.

The filling took a little bit of time and effort as the chicken is cooked, then the bacon is cooked, and then the vegetables.   Once everything is cooked the filling of the taquitos is easy.  After they are put together the taquitos are fried to a golden brown.  I loved how crunchy the taco shell became and the inside was pretty tasty too.  The chicken and bacon were balanced out with the peppers and onion then the cheeses gave it a nice flavor.  I really enjoyed these taquitos. 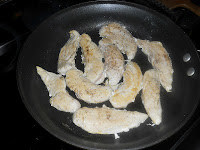 1.  Heat 1 tablespoon of olive oil in a large skillet over medium high heat.

2.  Sprinkle the chicken breast tenders with salt and pepper and place them in the skillet.  Cook for 4-5 minutes on each side or until cooked through.  Remove from heat and cut into bite sized pieces.

3.  Cook the bacon in the same skillet used for the chicken.  Cook until crispy then transfer to a plate covered with paper towels.  Drain for several minutes then crumble the bacon. 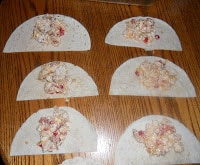 4.  Drain all the bacon fat except 1 tablespoon from the pan.  Heat the onion, garlic, and red pepper in the bacon drippings and cook for 5 minutes or until just softened.

5.  In a large bowl combine the chicken, bacon, and vegetables.  Add in the cream cheese and cheddar cheese and mix well.  Sprinkle in the salt, black pepper, red pepper, and cumin.  Mix well.

6.  Cut the tortillas in half.  Spoon about 2 tablespoons of the chicken mixture in the middle of each one.  Roll the tortillas around the filling and seal with a toothpick.

7.  Pour about a half inch of vegetable oil in a skillet over medium high heat.  Add the taquitos in batches of 4.  Turn to brown on all sides.  Remove from the oil and drain on paper towels.  Repeat with remaining taquitos.  Remove toothpicks before serving. 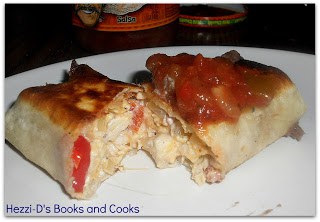