When two single people meet for the first time, they often arrange a “coffee date.” Coffee Dates From Hell is a humorous fictional account of several very bad coffee dates. Many of these dates are disasters from the beginning. Others are destined to be train wrecks if the two people ever see each other again. The coffee dates include several famous people such as Abraham Lincoln, Albert Einstein, and J. Edgar Hoover. You’ll also meet a range of colorful characters including a psychic, a cross dresser, and even a cannibal. The coffee dates include many funny twists and surprises. The humor is often silly, irreverent, and politically incorrect.  (-synopsis of Coffee Date From Hell by Jim Tilberry) 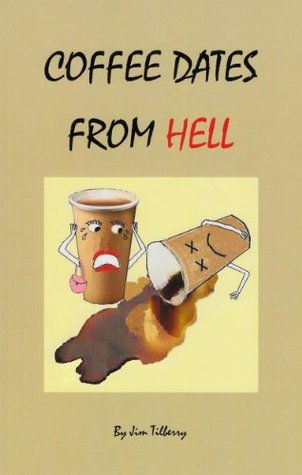 This is a book of fictional coffee dates between both everyday people and famous people.   They are all pretty funny and I can imagine some of them happening in real life.  One of the famous people is King Henry VIII who tells his date all about his previous wives and how he got rid of them by beheading!   Another story revolves around Harry Houdini and how he turned off his dates by performing constant magic on the date.

In addition to funny coffee date stories there are stories about themed coffee shops such as the Jungle Cafe that had live monkeys in it or The Coffee Shoppe that mimics a prison.  There are also several "Top 10" lists to round out the book.

The other thing I liked about the book was that it was easy to pick up and read anytime.  If I had 5 minutes before I was going somewhere I would pick it up, read a few stories, put it back down, and head out.   The stories are each only a few pages.   The book is for those with a certain twisted humor but I found many of the stories enjoyable and some really funny.

This is a great book if you like humorous stories and short stories and would be a fun gift to get someone.

I received one or more of the products mentioned above for free using Tomoson.com. Regardless, I only recommend products or services I use personally and believe will be good for my readers.