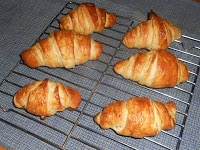 The Daring Bakers go retro this month!  Thanks to one of our very talented non-blogging members, Sarah, the Daring Bakers were challenged to make Croissants using a recipe from the Queen of French Cooking, none other then Julia Child!  I was so excited to see that this was the challenge for the month.  I love croissants but have always been too afraid to try and make them.  Laminated dough is a tough process to master.  While I definitely did not master it while performing this month's challenge, I feel that I have a better grasp of laminated doughs. 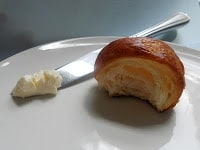 The recipe itself was a little intimidating.  There were 57 steps in making the croissants.  After following all 57 steps, I can see why bakeries charge so much for these buttery delights.  While there isn't a ton of labor involved in the process, the total time these croissants take to make is around 12 hours.  Most of the time is waiting for the dough the to rise a total of FIVE times.  That's right; the dough rises five separate times in this recipe.

1.  In a small bowl combine the yeast, warm water, and 1 teaspoon of sugar.  Stir gently and let sit for 5 minutes. 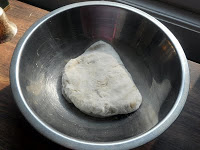 2.  In a saucepan heat the milk until warm (not hot) and add the salt and remaining sugar.  Stir.
3.  In a large mixing bowl combine the flour, yeast mixture, and milk mixture.  Combine all the ingredients using a rubber spatula until just incorporated.

4.  Turn the dough onto a floured surface.  Knead the dough about 10 times and form into a ball.  Return the dough to the mixing bowl, and place the bowl in a plastic bag.

5.  Let the dough rise for 3 hours or until the dough has tripled in size.

6.  After the dough has tripled, turn it out onto a lightly floured surface.  Use your hands and press it into a 8 x 12 square.  Fold the dough in three, like a letter (fold the top third down, and then the bottom third up). 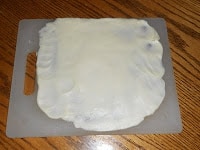 8.  Put the double-risen dough on a plate and cover with plastic wrap.  Place in the refrigerator while you prepare the butter.

9.  Place the stick of butter on a cutting board.  Using a rolling pin, beat the butter down until it is almost flat.  Use your hands to continue to spread the butter until it is smooth.  It should still be cold, but spreadable. 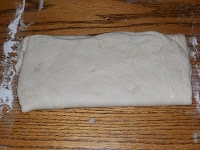 14.  Fold the top third down and the bottom third up.  Put the dough back on the plate again, wrap in plastic wrap, and put it back in the refrigerator for 2 hours.

15.  Lightly grease two baking sheets.  Take the dough out of the refrigerator and let it rest on a floured surface for 5 minutes. 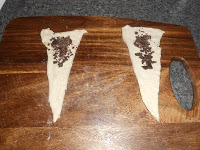 16.  Roll the dough out into a 20 x 5 rectangle.  Cut the dough in half and return one half to the refrigerator.  Roll the other half out until it is a 15 x 5 rectangle.  Cut the rectangle into 3 squares (5 x 5).  Cut each square diagonally forming 6 triangles.
17.  Stretch each triangle out a little to make it look like an isosceles triangle.  Starting at the wide end, roll the triangle up towards the point, and curve it into a crescent shape.  Place the unbaked croissants onto the greased baking sheets.  For the chocolate croissants, place a teaspoon of chopped chocolate and a sprinkle of cinnamon on the wide end and roll up toward the point. 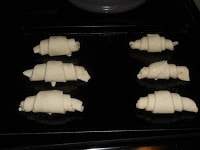 18.  Repeat this process with the rectangle in the refrigerator so that you end up with 12 croissants.  Cover the baking sheet loosely with plastic wrap and let rise for one hour.
19.  Preheat the oven to 475 degrees.
20.  In a small bowl mix the egg with 1 teaspoon of water.  Brush the egg wash over top of the croissants.  Put the croissants in the oven for 10-15 minutes, or until the tops are golden brown. 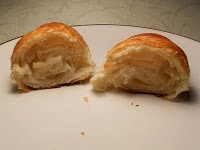 21.  Remove from oven, remove from baking sheet and place on a wire cooling rack for 10 minutes.
**The croissants can be frozen after they are rolled and shaped, but before the final rise.  After shaping the croissants, place them on a baking sheet lined with parchment paper and cover with plastic wrap.  Freeze for 12 hours.  Once frozen they can be put into a freezer bag.  When you are ready to eat them, defrost in the refrigerator on a baking sheet lined with parchment paper.  Remove from refrigerator and allow to rise a final time.  Bake according to directions above.** 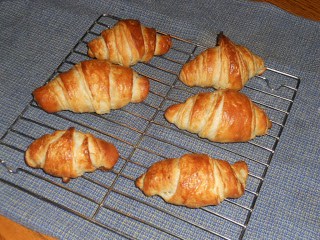