This week has to have been the best CSA box yet!   In addition to the lovely vegetables we've been getting every week this is the first week we got lots of glorious fruit and even some baking flour!  In our box this week we received apples, nectarines, cucumbers, zucchini, two types of squash, spaghetti squash, basil, sunflowers, onions, and whole grain flour. 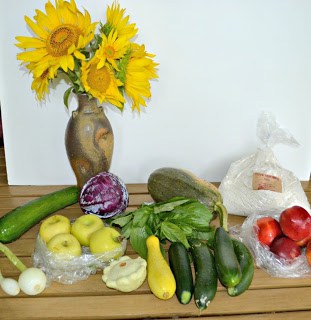 While I was going to use the apples and nectarines in a pit or some type of dessert, they were both so good that we just ate them for our breakfast and lunch for several days...yum!  The sunflowers added a bright summery touch to our dining room table. 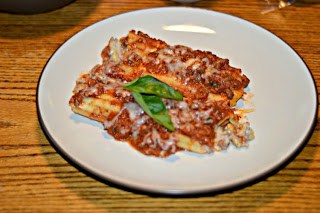 I used the zucchini, yellow squash, and basil to make manicotti.  I usually make a cheese manicotti but this time I went with a cheese, meat, and vegetable manicotti.  It turned out really well.  I used half of the meat in the manicotti along with cheese, shredded zucchini, and shredded yellow squash.  I then made a meat sauce using the other half of the meat.  The basil was chopped up in the sauce and placed on top as a garnish.  It was a filling and delicious entree.

3.  In a large skillet cook the ground beef over medium heat until browned.  Add the remaining garlic cloves and remaining pasta sprinkle and cook for an additional minute.  Remove from heat.

4.  Add half of the ground beef to the cheese mixture and mix well.

5.  Stir the marinara sauce into the pan with the remaining ground beef and mix well.

7.  Stuff the cooked manicotti shells with the cheese mixture.

9.  Bake for 40-45 minutes or until the cheese is browned and the sauce is bubbling.

10.  Remove from oven and cool for 5 minutes.  Serve hot with fresh basil leaves. 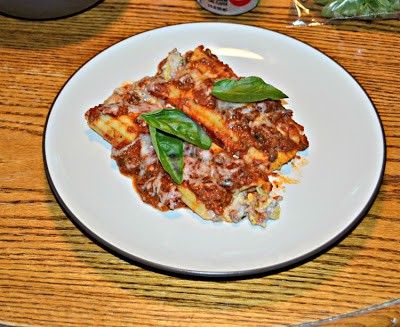 Then I decided I had to use the whole wheat flour.  We received this on Friday and on Saturday I was already baking.  I couldn't help it, whenever I have something new for baking I have to try it!  We were having salads for dinner so I made some rosemary whole wheat dinner rolls. 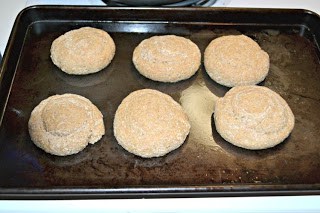 The rolls fluffed up enough but were a little bit dry.  I didn't add as much oil as the recipe stated because the dough looked so wet, but I found that whenever the dough rose, it also dried out.  Next time I've follow the recipe.  However, the rolls had a lot of flavor and I liked the texture as well.  This flour made a light whole wheat roll which we both enjoyed.

1.  In a small bowl, dissolve yeast in warm water.  Let sit for 5 minutes then add the warm milk and egg.  Beat until well combined.

2.  In a large bowl combine the whole wheat flour, rosemary, salt, and pepper.

3.  Add the yeast mixture to the flour mixture, then add in the honey.  Mix until a dough forms.  Add in the oil a tablespoon at a time until the dough begins soft and sticky.  At this point dump the dough onto a clean surface and knead for 2 minutes.

4.  Place the dough in a greased bowl, turning once to grease the top.  Cover with a dish towel and allow to double in size, about 1 hour.

5.  Punch the dough down and turn onto a lightly floured surface.  Divide the dough into 12 pieces.  Roll each piece into a long snake and roll it up (like a cinnamon roll).  Tuck the ends under and place on a greased baking sheet.  Cover with a dish towel for 20 minutes.

7.  Remove from oven and cool on a wire rack. 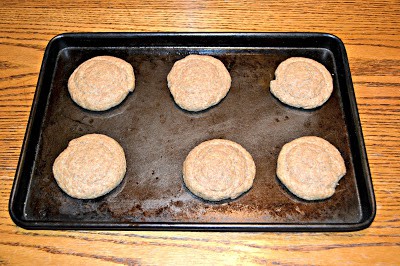