Jack Bryant, exhausted after a high-profile career as a lawyer, takes an early retirement in Fort Worth, Texas, where he plans to kick back, relax, and watch his son play football at TCU. But then an elderly widow shows up with a check for life insurance benefits and that is suspiciously made payable to her dead husband’s employer, Jack can’t turn down her pleas for help and files a civil suit to collect the benefits rightfully due the widow.  A chain of events that can’t be stopped thrusts Jack into a vortex of killings, and he and his new love interest find themselves targets of a murderer.

Gripping, engaging, and written with the authority that only a seasoned lawyer could possess, Dead Peasants is a legal thriller that will stun and surprise you. (synopsis) 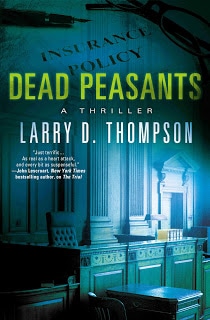 Jack Bryant is a wealthy man who has made a successful career as a plaintiff attorney.  He's been a lawyer long enough to have learning the tricks of his trade and he makes a large sum getting settlements from big corporations.  The book opens with Jack working on a big case against a refinery where there was an explosion and lives were lost.  He ends up winning this huge case, and turning a large profit for himself, and immediately declares he's retiring.

Retirement for Jack means moving back to Fort Worth to watch his son play football for TCU.  He moves into an expensive house and becomes friends with Colby Stripling, the beautiful real estate agent.  Life seems to be going great but Jack soon becomes bored.  Since he is set for life he decided to start a pro bono legal practice in a poorer section of town.  Things begin to go down hill when he picks up an insurance case that just doesn't sit right with him.

This is a fast paced legal thriller that kept me reading until the very end.  I wanted to know what was going to happen and couldn't get there quick enough.  I felt that the characters were realistic and the courtroom drama was enough to satisfy my craving but not so much that I was bored.  I was able to gather some of the clues in the book but I didn't know where the story was going until it ended.  At that point all of the clues came together and the story had a believable ending. 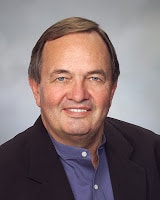 Larry D. Thompson is a veteran trial lawyer and has drawn on decades of experience in the courtroom to produce riveting legal thrillers. Dead Peasants is is third After graduating from the University of Texas School of Law, Thompson founded the Houston trial firm where he still serves as managing partner. The proud father of three grown children, he lives and works in Texas but spends his summers in Colorado, where he crafts his novels and hikes the mountains surrounding Vail. His greatest inspiration came from Thomas Thompson, his brother, who wrote many best-selling true-crime books and novels.