I love baking desserts.  I think I could seriously bake almost every day and not get tired of it.  The funny thing is, while I try almost every dessert I make, we rarely have more then a cookie or a slice of cake.  After Frank and I each try a little bit I either take the rest to work or Frank will give it to a friend or client.  It makes me happy to share my sweet treats with others because it makes them happy to eat them! 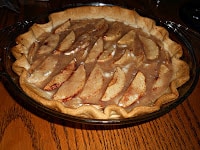 So when my cooking board choose a dessert recipe swap this week I didn't even have to think about whether or not I was in.  The most challenging part was choosing a recipe to give to the swap.  I have so many cookies, cakes, cupcakes, and other treats on my blog. 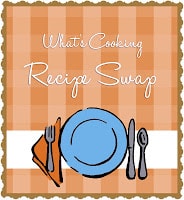 I received an apple cream pie from Tasty Treats by Tina.  Now I love apple pie and with fall coming up quickly this recipe was given to me at the right time of year.  I was interested in making the recipe because I've never had an apple cream pie.  I've had a strawberry cream pie but never apple.

The base of the pie is a thick cream which reminded me of a pastry cream only this was baked in the oven.  I found it unusual that the cream was poured on the bottom and then was topped off with the apples.  It looked really pretty when I put it in the oven and it made the entire house smell like cinnamon as it was baking.

The recipe called for me to use a double pie crust but I decided not to put a crust on top.  I like to see the filling in my pie.  It came out looking very pretty but the apples looked slightly dry.  Drizzling the glaze on top took care of that though.  This pie was really good and different.  It was creamy, full of spices, and the apples on top only added to the flavor.  This would be a great pie for a fall harvest party or even for Thanksgiving.

1.  In a medium saucepan on medium heat, combine the sugar, milk, cream, and butter.  Heat until the butter has melted, stirring occasionally.

2.  In a small bowl combine the cornstarch, vanilla, and 1 tablespoon of the hot milk and cream mixture.  Mix well.

3.  Stir the cornstarch mixture into the warm milk mixture.  Cook on medium heat, stirring constantly, until the mixture has thickened.  It took mine about 7 minutes to thicken.  Remove from heat and cool slightly.

5.  In a medium bowl combine the flour, half the cinnamon, the nutmeg, and the apples.  Mix well. 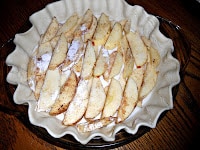 6.  Place the pie crust in a 9 inch pie pan.  Flute the edges.  Pour the warm, thickened cream on top of the pie crust.

7.  Arrange the apple slices over top of the cream.  Bake for 30-40 minutes or until the crust is golden brown.  Remove from the oven and cool.

8.  In a small bowl combine the powdered sugar, milk, remaining cinnamon, vanilla, and butter.  Whisk until smooth then pour over the top of the warm pie.

9.  Refrigerate for at least 1 hour before serving. 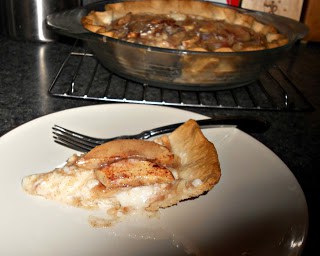