Choosing is a bad idea, because Desi always makes the wrong one, and sometimes there are no do-overs. Certainly not this time, when all has been lost and Desi can’t even save herself, let alone her friends. For Desi, the hardest thing is letting someone help her, to accept their sacrifice on her behalf. But that’s exactly what she’ll have to do in order to save the worlds from Helena’s destruction.

The goddess of Helheimer, long imprisoned by Desi’s father, Loki, is free at last, and she’s bent on reclaiming what once was hers. The nine worlds will be drawn into war, over Hell, over Earth, with innocent humans meaningless collateral. While Michael and the Guardians of Asgard, along with the golden-armored Valkyrie lead the battle for freedom, it’s Desi who holds the destiny of all the worlds in her hands.

Can she set aside her doubts, once and for all, and claim the gifts that are hers to bear? Can she accept the sacrifice that is made for her and Become all that she was created to be?

Her final choice will define not only her future, but the fate of humankind, forever more 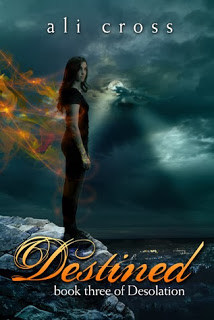 The final book in the Desolation trilogy opens with Desi being lost where no one is able to find her.  She is alone, she is sad, and she has plenty of time to think about the decisions she made that led her where she is now.  Thinking about how life used to be and how life could be if only she could escape her prison.

Meanwhile, one of the Hounds of Hell comes to visit James and Lucy and seems to know where Desi is being held.  Unable to say no, James embarks through the doors of Hell to rescue Desi and return her to Earth.  While he accomplishes his goal, he realizes that what he must pay is way more then he bargained for.

While James is playing hero and Desi is lost, Michael and the Guardians are gearing up for what may perhaps be the biggest war in all of time.  Many lives will be lost and worlds may fall if they cannot stop the raging battle and the woman at its core.

This was a fabulous ending to the trilogy.  There was so much action from the different worlds and all the characters we've grown to love.  Desi and Michael finally have the love they were meant to and Desi fully "becomes" what she was always meant to be.

This third novel also introduces Desi's extended family and where she comes from.  We find out who her grandparents are and more about her mother and father's relationship.  The one thing I aboslutely loved about this book is that in the end, Loki truly loves Desi even though he doesn't often show it.  It just shows how even the people we think are the worst are capable of love.

The end comes in the midst of a battle where Michael and Desi fight the good fight against the beings of other worlds.  If they win they will return to their world together.  If they lose, not only will they perish, the world they rule will perish with them.