I enjoy potato pancakes as much as the next person but I absolutely hate grating the potatoes before putting them together.  I remembered my mother telling me that they used to use leftover mashed potatoes to make potatoes pancakes so I figured I'd use that concept with a container of Simply Potatoes mashed potatoes.  I received the Simply Potatoes as part of the Foodbuzz Tastemakers Program. 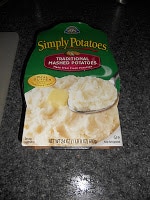 I wasn't really sure what  to put in the potatoes, but I thought of the things I like to eat with them and came up with garlic, onions, and cheese.  I had a bit of trouble flipping the pancakes because mashed potatoes are much softer then the shredded potatoes, but I eventually got the hang of it.  The best thing to do was to cook the potatoes for 7-9 minutes on each side or until they were a deep golden brown and sticking together.
These pancakes were much easier to make then the shredded ones because there is almost no prep involved.  The Simply Potatoes mashed potatoes are a buttery, smooth palate for the rest of the ingredients.  The texture of the potato pancakes was interesting with a crispy exterior and fluffy interior, but my husband and I both enjoyed them.

1.  Heat the mashed potatoes in the microwave according to the package directions.  Stir well and place in a large mixing bowl. 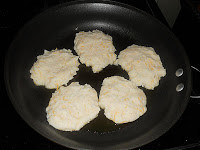 2.  Mix in the onion, garlic, egg, and cheese.  Stir until well combined.

3.  In a large skillet heat 2 tablespoons of the olive oil.

4.  With your hands form the potatoes into a ball shape and then flatten into a pancake.  Place each pancake in the skillet, leaving enough space in between them to flip them.

5.  Cook on each side from 7-9 minutes or until golden brown.  Remove from the skillet and drain on a paper towel.  Repeat with remaining potatoes. 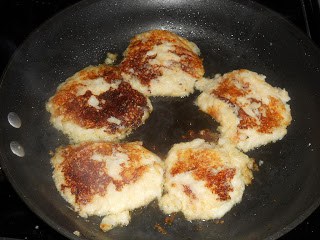 This post linked to:
Not Baaad Sundays, Sundae Scoop Sundays