Coleman and Dinah Greene are making names for themselves in the art world. Coleman's magazine publishing empire is growing and Dinah's print gallery is gaining traction. In fact, Dinah has just won the contract to select, buy, and hang art in the New York office of the management consultants Davidson, Douglas, Danbury & Weeks a major coup that will generate The Greene Gallery's first big profits. However, when Dinah goes to DDD&W to begin work, she discovers a corporate culture unlike anything she's ever encountered before. There are suggestions of improprieties everywhere, including missing art worth a fortune. And when two DDD&W staff members are discovered murdered, Dinah and Coleman find themselves swept into the heart of another mystery. Revealing the murderer will be no easy task...but first Dinah needs to clear her own name from the suspect list.  (-synopsis)

The book starts out with Dinah Greene taking a job to hang prints at DDD&W.   She's very excited because her gallery hasn't been making the sales it needs and this is a high paying job.   When she gets to DDD&W she's appalled by what she finds.   Partners are yelling at the staff, the cafeteria serves only fat laden foods, and the art curator begins screaming at her and telling her she's going to be fired!  The next day Dinah goes back into work early only to find a dead body. 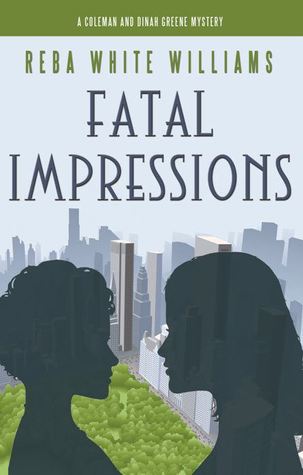 The police are called and Dinah is the only suspect.  Soon Coleman (Dinah's cousin), Johnathan (Dinah's husband), and Rob are on the case.   They are trying to find out who the real murderer is before Dinah is sent to jail.   While all of this is happening, a large company is trying to overtake Coleman and her two magazines.   The cousins have two major battles on their hands but they are ready to fight!

The storyline was a good one and I had no idea who the murderer was while I was reading.  There were plenty of characters introduced and each played their own part.   I find Dinah to be quiet but quite capable when she set her mind to doing something.   Coleman is the strong one of the bunch and would do anything to make sure Dinah is found innocent.   Johnathan is overbearing but seems to love his wife.   Rob was the wild card in this book.   He is in love with Coleman but she doesn't return his love and it makes him lose focus and in turn his investigated isn't up to par.

I did find that some of the obvious answers took the group a long time to come up with.   I also thought it was a little farfetched that Coleman's half brother, whom she's only met a handful of times, runs in to save her and her magazines.   Not only save her magazines but buy a building, a print shop, and a ton of other things to save his sister.  I also found it hard to believe that the Davidson twins did not look at their father's will and just took it at face value when they were told there was no money for them and they couldn't work for DDD&W.

Otherwise, it was a decent book with a good murder mystery.   Especially when a second victim is killed and that victim is the sister of the first victim.  Throw in the secretary that no one has ever heard of and who disappears on the day of the murder and you have a nice little mystery on your hands.