What she doesn’t plan for is murder.

Rita discovers a dead actor during the premier performance but vows to keep clear of the case. Sleuthing would upset her mom. Besides, there’s already a prime suspect, caught red-handed in his bloodied Santa suit. However, when the accused Santa’s wife begs for assistance—and points out that Celia and other performers could be in danger—Rita can’t say no. With the help of her elderly boss, Flori, and her coterie of rogue knitters, Rita strives to salvage her mother’s vacation, unmask a murderer, and stop this festive season from turning even more fatal.  (-synopsis) 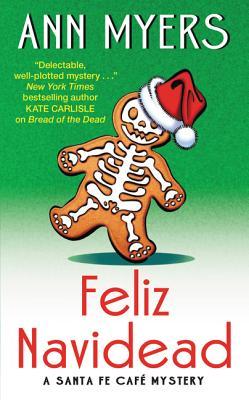 The book opens on Rita and her mother taking a walk.  Her mother is visiting her in Santa Fe and is determined to convince her to move home.  Rita loves Santa Fe, her job at the cafe, and her new love interest Jake.

Things go down hill will Rita's mom is set to meet Jake but he's late because he's bailing out a client.  When he does finally arrive Rita is on her way up to Pie in the Sky to tell the man playing the devil in the holiday play that he missed his cue.  But Rita won't be telling him anything as she finds him dead on the roof.  As she stares in horror Santa Claus comes at her with a pitchfork!

The next thing she knows her ex-husband and policeman Manny is on the scene as is her mother and her boyfriend.  Her mom is fussing over the murder, Jake takes on "Santa Claus" as his client, and Manny is playing the hot shot police officer.   Rita is sure all of this will ruin her mom's vacation and give her more reasons why Rita should leave Santa Fe and go back home.

Will Rita help to catch the real killer or is Santa Claus the one who killed him?   Will Rita be able to convince her mom that Jake is a great guy?

This was a fun mystery novel.  I really enjoyed the characters and the story line was fast paced and enjoyable.   There was a bit of everyday life thrown in with the sleuthing, romance (or lack there of), and some family time.  If you are a fan of cozy mysteries then this is a great book for you!