First let me say Happy Mother's Day to all the amazing and wonderful women out there who are mothers.  I for one do not know what I would do without my mother, Patty.  I hope all the mother's who read my blog have a fabulous day.  Now, on to the soup!

Cutting the onions was a disaster. Tears were streaming down my face and my husband was wondering what the problem was. Not five minutes later his eyes began tearing up as well. It got worse as I caramelized the onions. But once that was over the rest of the process was easy. 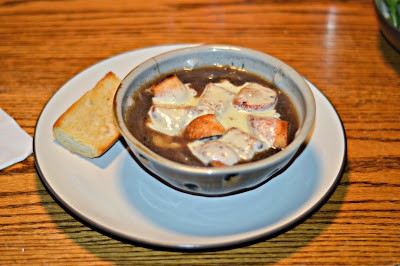 Frank wasn’t thrilled when he found out it’s a crock-pot recipe, but as soon as he smelled it cooking he changed his mind. It smells incredible when it’s cooking. I could smell the butter, onions, and beef. We couldn’t wait to try it.

The soup turned out thick and rich. I ladled it into pottery bowls handmade by our friend Shane, topped it with croutons and cheese, and put it under the broiler. It looked amazing! The cheese was gooey and brown and the croutons peeked out from underneath it.

I think this version of French Onion soup has forever changed my mind about French Onions soups. It was out of this world! Rich and beefy with caramelized onions, topped with gooey Gruyere cheese and crunchy croutons. It doesn’t get much better then this!

1. In a large skillet melt the butter. Once it is melted add the sliced onions. Sprinkle the sugar on top and sauté about 20 minutes, stirring occasionally, until the onions are caramelized. Put the onions in the crock-pot and turn on low heat.

2. Add the beef to the same skillet along with the wine. Cook for 5 minutes or until the beef is no longer pink. Make sure you get all the brown bits off the bottom and mixed with the wine. (My London broil was left over from last night’s dinner so I only cooked it for 1 minute to get the wine flavor and brown bits off the pan).
3. Pour the beef and wine mixture over top of the onions in the crock-pot. Add the broth, water, Worcestershire sauce, pepper, thyme, and bay leaf to the crock-pot. Cook on low for 5-6 hours.

4. About 30 minutes before serving, preheat the oven to 350 degrees. Cut the French baguette into 1 inch cubes. Heat the butter in a large skillet. Add the baguette pieces along with the black pepper and sauté for 2-3 minutes to cover the croutons in butter. Transfer the croutons to a baking pan and cook for 10-15 minutes or until brown and crunchy.

5. Turn on the broiler. Ladle the soup into oven proof bowls. Top with croutons and grated Gruyere cheese. Broil 6 inches from heat for about 3 minutes or until cheese is bubbly and browned. 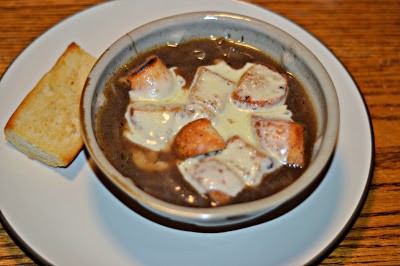