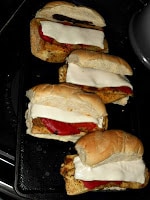 In the summer we like to sandwiches for dinner a lot because they don't take a lot of time and even if we have to heat them the oven is only on for a few minutes.  I was excited that this week's recipe swap was for sandwiches.  I was even more excited when I saw I received Lishie's eggplant sandwiches.

Now I love eggplant but I only cook it one of two ways.  We either fry it and put it into eggplant parmesan or eggplant parmesan sandwiches or I cut it up and through it into a vegetarian casserole.  I was happy to see that while this eggplant sandwich was fried it didn't have marinara sauce anywhere near it.  The fried eggplant is put on a sub roll along with roasted red peppers and fresh mozzarella.  Then olive oil and balsamic vinegar is drizzled on top and it's baked just until the cheese melts.  It is delicious and feels so much lighter then eggplant parm.  The crispy eggplant, roasted peppers, and the tangy flavor from the balsamic make it a flavorful summer sandwich. 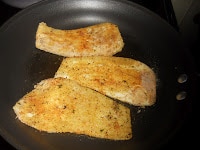 2.  Whisk together the egg and the milk in a shallow dish.  In a second shallow dish combine the breadcrumbs, oregano, garlic powder, black pepper, and paprika.

3.  Preheat the oven to 375 degrees.  Slice the sub rolls in half and place on a baking sheet. 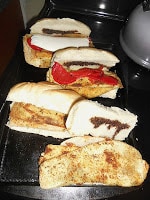 4.  Heat one tablespoon of olive oil in a large skillet over medium high heat.

5.  Dip the eggplant slices into the egg mixture and then coat with the breadcrumbs.  Place 3 or 4 slices in the skillet and heat for 2-3 minutes per side or until it is golden brown.  Remove from skillet and place on a sub roll.  Repeat with the remaining eggplant.

6.  After the eggplant is placed on the sub rolls top with roasted red pepper, mozzarella slices, and a sprinkle of black pepper.  Splash a little olive oil and balsamic vinegar on the sub roll and place in the oven..

7.  Bake for 5 minutes or until the cheese is just melting.  Serve hot with extra olive oil and balsamic vinegar. 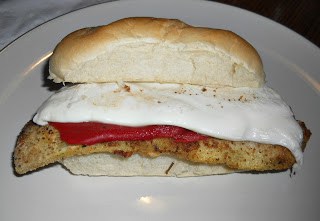