It's starting to get chilly out and I'm sad because that means grilling season is coming to an end.  For some reason we haven't grilled out as much as we normally do during the summer and fall.  It may have to do with the crazy amount of rain we've had this year.  I don't know but in any case, Frank and I have both been wanting to use the grill as much as possible before the snow comes.

Living in a town named Frostburg we get a lot of snow during the winter.  Even when it isn't snowing it's cold.  I like to say that we have winter 9 months a year here but really it's more like 7 months of the year. 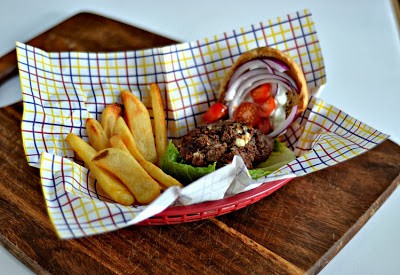 So we wanted to use the grill as much as possible in the next month.  We decided on burgers but I wanted to make something a little different.  We really like these lamb patties that I pan fry and put in pita pockets but I wanted to give them more flavor and put them on a bun.

Since these burgers were going to be Greek burgers I wanted to add in some hummus and feta cheese.  I had these super cute Sabra Hummus cups in the refrigerator that were the perfect portions for making burgers.  Aren't they cute with Spongebob and Patrick on them?  I've been taking them to school along with pita bread and they make a great snack.  So I added some hummus and feta to the ground beef and jazzed it up with some seasonings. 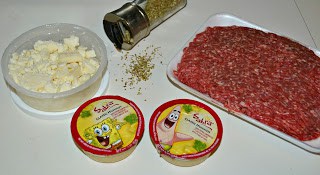 Frank put them out on the grill and they were ready in no time!  I dressed my burger up with lettuce, tomato, red onion, and Tzatziki sauce for a delicious Greek Style Hummus Burger.  The burger was bursting with flavor and I loved the addition of the feta mixed in with the burger.  The hummus gave it a nice garlic flavor and helped hold the burger together.  I could even taste just a hint of the lemon juice.

2.  Combine all of the burger ingredients in a bowl and mix with your hands until well combined.  Divide the burger mixture into 4 balls and shape into burgers.  Set aside.

3.  Combine all the ingredients for the Tzatziki sauce in a medium bowl.  Mix well and refrigerate until ready to use. 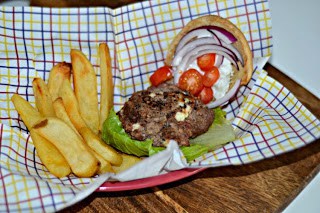 5.  To assemble the burgers place them on a bun and top with lettuce, tomatoes, red onion, and additional feta cheese.  Spoon the Tzatziki sauce on top and enjoy. 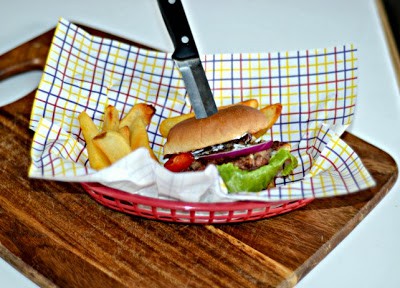 Sabra provided me with the hummus and a stipend for my work but all opinions, photos, and text are 100% my own.