4 shares
In a gritty town rife with organized crime, dirty cops and corrupt politicians, Detective Adam White stands alone as the people's symbol of justice and hope for a brighter future.  He's cracked the biggest cases, and stood up to the crime families who've torn apart Prairieville with their power struggles. He's gorgeous, humble and incorruptible; a crime fighter so pure that the locals nicknamed him the White Knight.
What the people don't know is their reluctant hero is cracking before their eyes. Ten years have passed since a pack of bank robbers gunned down his wife in the street. He's relentlessly worked every case he could get his hands on since that night with the hopes of finding some link to her killer, but every lead always winds up a dead end. He made a vow on her death bed that he wouldn't stop looking or move on with his life, personal or otherwise, until her killer was either dead or behind bars.
His obsession is starting to affect his work, including a new set of murders which are eerily similar to cold cases in which a gangland legend called The Reaper is the main suspect. A routine canvas of the area in which the bodies were found led Detective White to Heath Grim, a reclusive millionaire with grisly facial scars and a past which doesn't quite add up. There's something about his story which makes Detective White curious to dig deeper into his background.
Just as Detective White closes in on his killer, the mob hatches an elaborate scheme which could cost him everything. In his moment of need, an unlikely ally presents a way out of the plot against him and information on his wife's killer. However, it leaves Prairieville's paragon of justice with a moral dilemma. Can he abandon all of the heroic ideals upon which he's based his life and become the type of man he's hunted for so long to settle a score with his wife's killer?  (-synopsis) 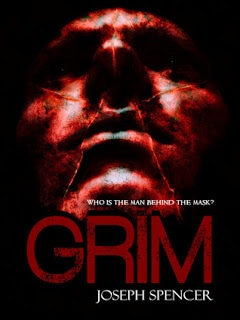 Heath Grim is a war hero who has no control of himself whenever the "beast" comes.  He must do whatever the beast tells him too, even when he wakes up covered in blood.  His only friends are the spirits of those who have died around him.  The only thing he's looking for is revenge on the people who killed the woman he loved.
Adam "White Knight" White is a hero police detective who seems to solve every crime he comes across....except for the 10 year old murder of his wife.  While investigating a series of murders he begins to see a connection between them and murders that occurred years ago.  He knows the name of the killer but doesn't know what he looks like.  Throw in the fact that his dead wife's roommate from college, who is a dead ringer for his wife, is moving in with him and Adam's life is beginning to turn upside down.
In between the murders mob boss Cyrus Black is using his pull on the people in town to become a puppet master with a very sinister agenda.  Soon the bodies are piling up and there are multiple killers to find.  Adam White is hot on the heels of the killers but he's always one step behind.
This story is full of action and horror at every page turn.  I knew who the killers were but I never knew where they would strike next.  There's also a paranormal aspect to the story that comes out piece by piece until all is finally revealed.
This is a great book for those who enjoy paranormal thrillers with a bit of horror thrown in. While I enjoyed the book, I found the last 30 pages or so to be so unrealistic that I was a little disappointed with the ending.
I give this book 3 out of 5 stars.