I'm not sure how I missed out on reading this book in high school, but I'm so glad I went back and read it.  The Handmaid's Tale by Margaret Atwood is a look into a not too distant future where the United States is now called the Republic of Gilead, and is back to a Bible driven society where the goal of every woman is to help repopulate the Earth.  Even though The Handmaid's Tale was written in the early 1980's it is a dystopia novel that is similar to books that are popular in present day such as The Hunger Games and Delirium. 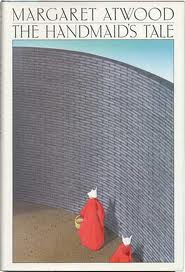 The Republic of Gilead is in the midst of a crisis.  The world has been polluted with nuclear waste which has left over half the population barren.  The infertile women in the society are known as "Unwomen" are are sent to the dreaded "Colonies" where they must work cleaning up nuclear waste or working in the fields.  Women who are able to have children are sent to a Red Center and taught to be a Handmaid by the Aunts.  The Handmaids are contracted out to Commanders whose Wives are infertile.  The job of the Handmaid is to be with Commander and have a child that will then belong to the Wife.

Offred is one of the lucky women who is chosen as a Handmaid because in her former life, before the nuclear crisis, she had a child of her own.  Offred is old enough to remember a time before the Republic was born.  She remembers wearing swimsuits and shorts, loving her husband, having a child of her own.  These things are no longer possible.  The Handmaids are now clad in long red dresses that cover the arms and legs.  A veil is worn on the head and wings on the face so that no one can see who they truly are.

The days and nights of the Handmaid are long and boring.  The only thing that breaks them up is the cheer of a "Birth Day" or the sadness of a "Salvaging".  Her world begins to change when the Commander invites her into his room alone and shows her what he hides in there.  Slowly Offred is shown that the world of her childhood is not completely dead and she begins to hope of better days.

The Handmaid's Tale is worth a read.  The number of thought-provoking issues that are looked at in this story are startling.  The issues of nuclear war, feminism, the Bible, government run society, women as sexual slaves, and many others come into play throughout the book.  It's a novel that is a prevalent today as it was in the 80's when it was written.