I have been a fan of the Anita Blake Vampire Hunter novels since Guilty Pleasures came out.  I really liked Anita as the books strong main character.  The first 12 books in the series were really great and then the next 7 books came out.  Books 13-19 are full of the ardeur and Anita's need to have sex with multiple men multiple times in the books.  I almost gave up on the series during these books.  The only book that saved it for me was Blood Noir.  Now Laurell K. Hamilton has hit book number 20 and she has come back to where it all started with Hit List. 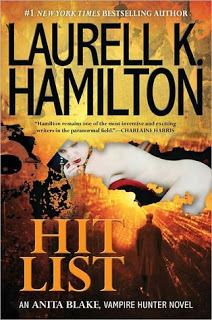 This book is back to Anita being the strong woman in charge who doesn't need a man in her life.  The book starts out with Anita and Ted, aka Edward, hunting vampires as part of the US Marhalls preternatural branch.  This is their fourth city in a month where a serial killer is brutally murdering weretigers.  As Anita and Edward look into things they learn that the killings are being done by "those who shall not be named" (The Harliquen).

Things take a turn for the worse when a Marshall is seriously injured while the Harliquen try to take Anita alive.  It turns out the Mother of All Darkness is looking for Anita as a host body once again.  Edward and Anita decide they cannot fight them alone and have to call in the only two other US Marshalls who are as good as they are:  Bernardo and Olaf.  The four of them must prepare to battle the most powerful vampires and wereanimals on the Earth.

There is a lot of crime fighting, guns shooting, and hand to hand combat in this book. I feel like Anita Blake is finally starting to get back to who she was when this series started.  She's strong, she's a fighter, and she doesn't need any man to back her up.  She barely spares a thought for her men at home.  About halfway through the book a few of her bodyguards from home turn up but they mostly stay in the background while she and Edward take center stage.
The only thing this book is lacking is the ending.  Throughout the book it is one action packed moment after another then at the end it all stops.  It is 5 pages of abruptly tying up a bunch of loose ends.  I was thrilled by this ending, but I am glad to see Anita back to her a$$-kicking self.