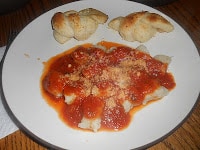 Making homemade gnocchi has been on my to do list for a long time. I love the pillow soft clouds of potato pasta. I figured they were probably difficult to make just like any pasta and was surprised when I took a look at the recipe. It didn’t seem nearly as difficult as I thought but it did look time consuming.

I happened to have a 2 hour delay yesterday so I baked my potatoes before going to work and let them cool during the day. When I got home I peeled them and put them into the shredder on my new food processor. The shredder made the recipe fairly easy because it took around 2 minutes to shred all 3 potatoes. 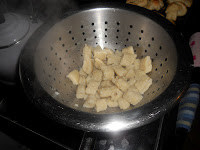 Mixing the dough was the difficult part. I had a hard time getting the potatoes and flour to form a dough, but after 30 minutes or adding flour and kneading I’d formed a passable dough. The gnocchi was easy to form and cut and they puffed up in the boiling water. The end result was a little heavy but tasted ok. It wasn’t the best gnocchi I’ve ever had but both my husband and I thought it was good for a first effort. In the future I will bake the potatoes longer so they are easier to incorporate into the dough. 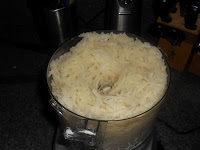 1. Preheat the oven to 425 degrees. Bake the potatoes for an hour and a half. Set aside to cool. 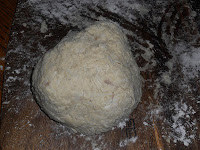 2. Peel the potatoes, and put them through a food mill or a food processor shredder.

3. Pile the potatoes on a cutting board and drizzle the egg over top of them. Add in ¾ cup of flour and salt. Use your fingers and combine the ingredients to form a soft dough. Continue adding flour until the dough is smooth and moist, but not sticky. 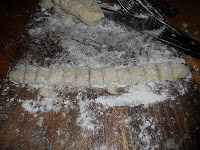 4. Cut the dough into four pieces and roll each piece into a long roll. Use a knife and cut into ½ inch pieces. Dust with flour.

5. Bring a pot of water to a boil. Put the gnocchi in the water and boil for 5 minutes. Drain and serve with sauce. 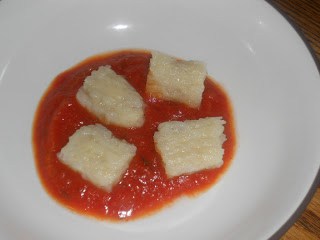