Pierogies are a tradition both in my family and in my hometown of Pittsburgh.  Growing up we had pierogies all the time.  My great aunt Kaye always made them and whenever we went over to her house she would pull a bag of them out of the freezer for us to take home.  It was always such a treat. Her pierogies were always stuffed with potatoes and cheese which is traditional and my favorite.

In addition to Aunt Kaye's pierogies, there were always several pierogi stores in Pittsburgh.  The best part of going there is that they had all different flavors of fillings and they were homemade in the store.  My favorite flavors there were potato and bacon and the dessert pierogi with apple or apricot filling.

Of course when I talk about pierogies I have to talk about The Great Pierogi Race.  If you've ever been to a Pirates game in Pittsburgh you have surely seen these races.  People are dressed up in giant pierogi costumes and proceed to race each other in between innings at the baseball games.  It's hilarious if nothing else. 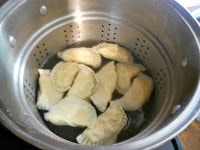 Now that my Aunt Kaye has passed away my dad has taken on the task of making homemade pierogies for the holidays.  He's been making them for Thanksgiving, Christmas, and Easter the last few years.  He often makes them with his sister or with my brother.  Because I live in Maryland now, and the process of pierogi making takes hours, I haven't been able to make them.

Last week my dad had a vacation week off from work and I wasn't yet back to school so he and my mom drove down so that dad and I could make pierogies together.  It was a lot of work but having two people making them together helps a lot.  I rolled out the pasta and cut the dough then my dad filled the dough, crimped the edges, and boiled them.  We switched about half way through.  It took us 3 or 4 hours but we ended up with over 8 dozen pierogies.  It was a fun afternoon and now I'm able to make them myself and can carry on our family tradition.

1.  In a large stockpot bring water to a boil.  Place the peeled potatoes in the water and cook until the potatoes are tender.  Drain the potatoes and place in a large mixing bowl. 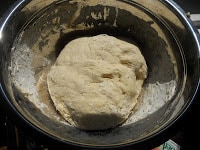 3.  Put the flour in a large mixing bowl.  Dig a well in the center of the flour and add in the eggs.  Begin to mix the dough.  Add in the water and continue mixing.  Add in the salt, olive oil, and butter.  mix until the dough just comes together.

4.  Turn the dough onto a floured surface and knead for 10 minutes, adding additional flour or water as needed.  The dough with be firm and smooth. 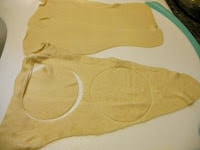 5.  Roll the dough into a cylinder.  Cut off a piece that is 2 inches by 1 inch.  Using a pasta roller set on 6 roll the dough out.  Then put the dough through the rollers on the 4 setting and then the 2 setting.

6.  One the dough is rolled thin, use a 3 inch biscuit cutter to cut out rounds.  Place the round on a floured cutting board. 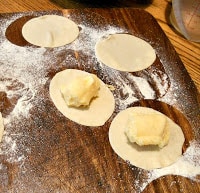 7.  Place a heaping tablespoon of the potato filling into the center of each round.  Pull one side of the dough round up and over top of the filling.  Press down on the edges to seal.  The piergoies should be in a half moon shape.  Use a fork to crimp the edges of the pierogi.  Set aside.

8.  Continue until all of the dough or filling is used.  Then bring a large pot of water to a boil.  Drop in 8 pierogies at a time and cook for 4-5 minutes or until they float to the surface.  Using a slotted spoon remove the pierogies and place on a cookie sheet to dry.

9.  Flip the pierogies over after the tops have dry in order to dry the under side.  Once they have dried pack them into gallon sized freezer bags, one dozen in each bag.  My aunt likes to pour melted butter over top of hers before freezing but I like to leave mine plain.

10.  If freezing place directly in the freezer.  Pierogies can be frozen for up to 4 months.  When ready to eat simply remove the frozen pierogies and cook in boiling water for 4-5 minutes or until heated through.  You can also thaw the pierogies in the refrigerator over night and then fry in butter or steam in a pot for 3-4 minutes.

Note:  Potato and cheese filling can be made the night before and refrigerated.  The process from start to finish can take anywhere from 3-5 hours so make sure you have plenty of time to dedicate to the pierogi making process. 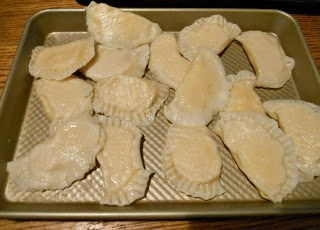