After making the homemade pizza crust for my deep dish pizza I've decided I need to start making pizza dough more often.  It's easy to make, freezes great, and taste so much better then anything I could buy.  I wanted a thin crust for my pizza and was looking for a recipe that made more then one crust so I could use one and freeze the other.

The pizza dough that I made is fabulous.  In my opinion there is almost no better smell in the world then yeast dough rising and the baking of fresh bread.  This was no exception.  There are only a few ingredients in the pizza dough so it's simple to make.  I had to add in a little more flour because it was sticky, but otherwise I had no problems.  The dough rolled out nice and think and I just doubled over the edges to make a thicker crust to hold on too. 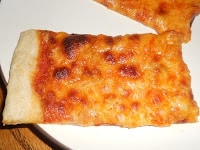 The crust tastes thin and fresh.  I made a pizza with half pepperoni for Frank and half vegetables for me.  It was great.  The bottom of the crust was crispy and the end of it was light and delicious.  I can't wait to use it to make stromboli's next time!

1.  Put the warm water into a small mixing bowl.  Sprinkle the yeast over the top of it.

2.  In a large mixing bowl, or the bowl of a stand mixer, combine the flour and salt.  Mix to combine.

3.  Measure the room temperature water and add it to the bowl with the yeast mixture.  Stir gently to combine.  Add the yeast mixture and the melted butter to the flour mixture.  Then either mix on low speed or by hand until a dough ball is formed. 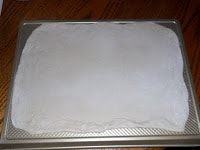 5.  Once the dough has doubled punch it own to deflate.  Transfer the dough to a lightly floured surface.  Divide the dough into 2 pieces.  If freezing the dough, wrap it in plastic wrap at this point and place in a freezer bag.  If using right away roll each piece of dough into a ball and cover with a damp cloth.  Let it rise for 20 minutes. 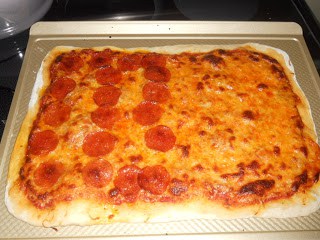 This post linked to:
Meatless Mondays, Mangia Monday, Making you Crave Monday,
Your Recipe, My Kitchen﻿, Tuesdays at the Table, Made From Scratch Tuesday