Let me be honest. I had absolutely no interest in reading Hunger Games by Suzanne Collins. I had read and heard many favorable reviews about this book but it did not seem like something I would want to read. Several times when I was in the library I picked it up, looked through it, and put it back down again. It did not sound interesting at all. 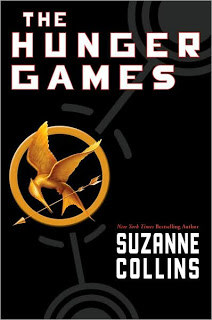 However, after seeing several more reviews on how great all three books in the series are, I broke down and picked it up from the library. I had it for two weeks before I finally decided to pick it up and begin reading. The first 20 pages didn’t hold my interest but I kept on going. I took it to bed with me on Wednesday and ended up not going to bed until I finished part one…I was hooked. Thursday night I stayed up late reading part two, I couldn’t stand not knowing what was going to happen to Katniss and Peeta. I finally woke up early Friday morning and finished the book. I have to admit, the critics were right. This book was one of the best I’ve read all year. I literally could not put it down and have already picked up the second book to continue reading.

The book takes place in the United States in the distant future. The United States has collapsed due to wars, fires, and famine. Now all that is left is The Capital and 12 Districts spread out along the country. Each year The Capital takes two tributes, one boy and one girl between the ages of 12-18, to fight to the death in the Hunger Games. This is a yearly televised event that takes place as punishment for the collapse of the nation.

This year in District 12 a young girl named Prim’s name is pulled to be the female tribute. Her sister Katniss fears for the life of her weak younger sister and volunteers to take her place. While Katniss may be small, she makes up for it with her intelligence, her skill with a bow and arrow, and her knowledge of survival skills. She enters the arena with nothing but the clothes on her back and 23 fierce competitors, several of which have been training their entire life for this moment.

The scene inside the arena is brutal. The tributes get 60 seconds to look around before they are released into the environment. Several tributes die within the first few minutes of the games. Others are hunted and tortured later on. It was a nail biting, on edge of my seat remainder of the book. The thoughts of the tributes, their gruesome deaths, and the final triumphant scenes were well worded and thought provoking.

Although this book is written for teenagers, I thought it was an amazing, well written book for adults as well. It would be a great book for a book club discussion as so many ethical points are brought into view. I finished the second and third book of the series within a week and they were just as good as the first.

On a side note, Hunger Games the movie will be out in Spring of 2012.