6 shares
Corey Logan was set up. She knows Nick Season’s terrible secret. Coming home from prison, all Corey wants is to be with her son. To get him back, she needs to make a good impression on the psychiatrist evaluating her. But Dr. Abe Stein doesn’t believe she was framed–until his well-heeled mother falls for the charming state attorney general candidate, Nick Season.
As the dogs of war are unleashed, Corey and her son run for their lives–taking her boat up the Pacific Northwest’s remote Inside Passage. Inside Passage is the first in Weissbourd’s haunting, heart-stirring Corey Logan trilogy.
Visit BurtWeissbourd.com for more information! 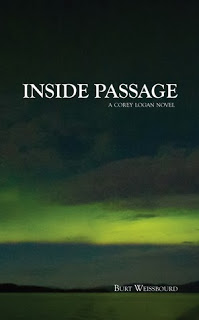 This book caught my attention after the first 20 pages and I was so engaged that I read it all in one day!  The book begins with Corey Logan getting out of jail for something she didn't do.  Her son, Billy,  is in foster care and his father is dead.  Corey will do anything to get Billy back but she has one big obstacle to cross...Nick Season.
Nick Season is the reason Corey is in jail.  He's the reason Billy's father is dead.  However, no one knows the real Nick Season.  They only know the high powered attorney who is well on his way to becoming the next Attorney General.  He's rich, he's charming, and everyone seems to love him.
As part of Corey getting her son back she is required to be evaluated by a shrink.  She goes to several different ones before finally settling for Dr. Abe Stein.  Abe is a quiet, quirky, and clumsy psychiatrist who is the son of a high powered publicist.  The high powered publicist who just happens to be dating Nick Season.
As things heat up Corey realizes she has to grab Billy and run before Nick decides to take her out.  The one thing she didn't count on was Abe coming to her rescue.  The shy psychiatrist is suddenly her hero as he comes up with plan after plan to get her and her son back together.
This book is action packed and kept me on the edge of my seat until the end.  There is murder, drugs, deception, and romance.  The only complaint I have about the book is that some parts felt like deja vu as the same thing happened multiple times in the book and I had to look to make sure I wasn't rereading a part I'd already read.  Otherwise, if you enjoy fast paced thrillers this is a book for you!
I give this book 4 out of 5 stars.