I was asked to make desserts for our end of the school year luncheon.  They wanted me to make a chocolate cake and a vanilla or yellow cake.  I knew I wanted to make my chocolate covered strawberry cupcakes for the chocolate cake but I wasn't sure what to make for the other one.  I set to work searching through my cookbooks until I came to the perfect cake.  It's a lovely lemon cake with bright red raspberry filling and is topped with lemon buttercream. 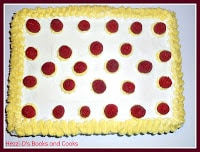 The cake batter turned out light and fluffy.  I baked it in a 9 x 13 pan which I was worried about but it came out beautifully.  I cut the cake in half and put in a layer of homemade raspberry jam that I canned last summer.  I was most concerned about the swiss meringue buttercream but it turned out like a dream.  Silky and smooth the buttercream was bright white and packed with lemon flavor.  I had some difficulty spreading a layer of frosting on top of the jam but otherwise this cake went together without a problem.

While I kept the cake refrigerated over night because it was humid and the frosting started melted, I took it out an hour before serving because it is much better served at room temperature.  I garnish the top with fresh raspberries on top of yellow tinted lemon frosting.  It was the perfect summer time cake and the staff enjoyed it as much as I did. 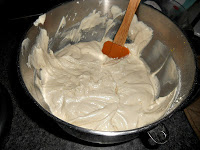 1.  Preheat the oven to 350 degrees.  Spray a 9 x 13 metal baking pan with cooking spray or line it with parchment paper.


3.  In the bowl of a stand mixer combine the sugar and lemon zest.  Mix them together with your fingers until the sugar smells like lemon.  Add the butter and mix on medium speed for 3 minutes. 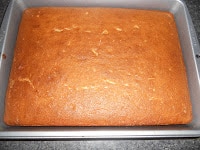 
5.  Pour the batter into the prepared pan and bake for 45-55 minutes.   The top should be golden brown and a toothpick inserted into the middle should come out clean. 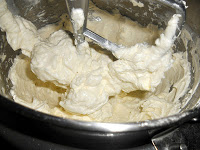 6.  Remove the cake from the oven and run a knife around the edges.  Allow to cool for 5 minutes in the pan.  Invert the pan over a wire rack and allow the cake to cook completely.


7.  To make the buttercream place the sugar and egg whites in a heat proof bowl.  Place over a pan of simmering water and whisk constantly for 3 minutes.  The sugar should be dissolved and the mixture will be shiny. 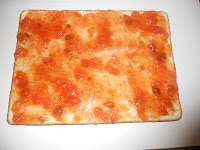 8.  Remove the bowl from heat and pour into the bowl of a stand mixer.  Beat on medium speed for 5 minutes or until the mixture has cooled.  Add in the butter one stick at a time until the buttercream is thick and smooth, about 8 minutes.  During this time your buttercream may curdle or separate but just keep on beating it and it will come back together.


9.  On medium speed add in the lemon juice and vanilla.  Beat for an additional 1-2 minutes or until the buttercream is shiny and smooth.


11.  Use the remaining buttercream to frost the top and sides of the cake.  Decorate the top with fresh raspberries.  You can also tint a small portion of the frosting yellow and use it to decorate the top as well. 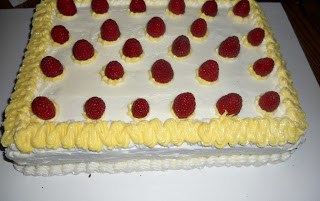