We wanted to have a Labor Day picnic. I had brought home some food from my parents and our friends had steaks thawing in the refrigerator. The only thing we needed was a dessert. As an avid cupcake baker, I have probably close to a hundred cupcake recipes sitting in a file waiting to be made. As I glanced through the stack I noticed one for Lemon Honey Cupcakes. Just the sound of them made my mouth water.

What made them sound even better was the fact that both Frank and I had had sore throats over the weekend. Whenever my throat is hurting my dad always makes me his “special tea” which is loaded with lemon and honey and always helps my throat. I figured maybe these cupcakes would have some healing powers as well.

The smell of these cupcakes baking was heavenly. Our house smelled like lemons and cake-YUM! While the cupcakes cooled I made a honey lemon frosting to go on top of the cupcakes. The cupcakes themselves were sweet with a hint of citrus. The frosting was out of this world; I seriously could have eaten the entire bowl without the cupcakes. 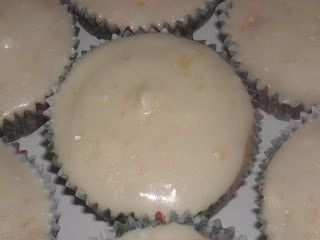 The cupcakes were a hit at the picnic. They were the perfect compliment to a heavy meal of steaks and pork BBQ. They are sweet and tangy and go well with a hot cup of coffee. I will definitely be making these cupcakes again.

4. In a stand mixer beat butter, applesauce, honey, and sugar until fluffy. Beat in the egg until well blended. Add in egg whites one at a time and beat for 2 minutes.

5. With the mixer on low, beat in half of the flour mixture. Then mix in the sour cream mixture. Beat in the remaining flour mixture until just combined.

6. Pour batter into prepared muffin tins, filling each cup three-quarters of the way full. Bake 18-20 minutes or until a toothpick comes out clean. Cool for 5 minutes and then transfer to a wire rack to finish cooling. 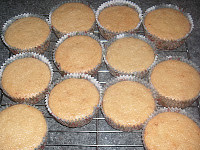 1. In a stand mixer beat butter, honey, and lemon zest until creamed. Slowly beat in the milk. On a low speed beat in the powdered sugar until just blended.

2. Stir in the lemon juice until the mixture is fluffy and pale yellow.

3. Spoon into a pastry bag or a ziptop bag. If in a ziptop bag snip off the corner and use to frost the cupcakes. 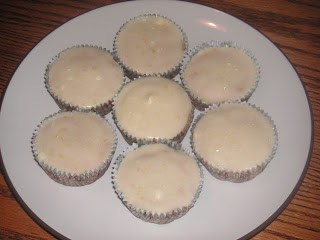