For me there is no better comfort food on a cold fall night then homemade macaroni and cheese. I’ve used several recipes over the years and while they have all tasted good, I generally end up with some hunks of cheese in the macaroni because I use cheeses that don’t melt well.

I looked online to find a recipe that I could live with, and then added in some cheeses that melt well. I’ve also learned that while adding ham to the macaroni and cheese gives it an excellent flavor, big hunks of ham are not very good in it. I also like to have a sort of crumbly on top that brown in the oven.

I had a few mishaps when preparing the macaroni and cheese this time. I dumped about half a cup of steaming hot noodles on my hand which then went all over the floor. I also spilled a few of the cheese cubes and then ended up stepping on them in my socks. 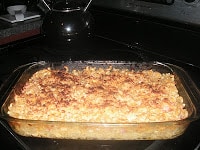 But, it was all worth it when I pulled the macaroni out of the oven. The top was a crispy brown, and I could smell the ham and cheese. It was creamy and almost melted in my mouth. This is by far the best attempt at homemade macaroni and cheese I’ve made. My husband agrees. Adding the fontina and Velveeta cheeses to the cheddar made a world of difference.

1. Cook the macaroni noodles according to the package directions. Drain and set aside.

3. In a large skillet melt the butter over medium heat. Slowly whisk in the flour until smooth. Cook about 2 minutes, continuing to whisk.

4. Slowly add in the milk, whisking until smooth. Bring to a boil and then reduce heat to simmer. Stir in the salt and pepper. 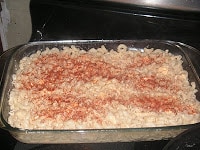 5. Add in the cheese about a handful at a time. Slowly whisking to incorporate the cheese into the milk mixture. After all cheese is added cook an addition 3 minutes until the sauce has thickened.

6. Place the macaroni noodles into the prepared baking dish. Mix in the chopped ham. Pour the sauce over top of the noodles and ham and mix well. Sprinkle the top with the paprika and garlic sauce. Bake for 10 minutes.

7. Meanwhile, melt the butter for the topping in a small bowl just until soft. Mix in the panko and cheddar cheese. Sprinkle on top of the macaroni after it has baked for 10 minutes. Continue baking in the oven for 15 minutes. At the end of 15 minutes, turn the oven to broil. Broil the top for 1-2 minutes or until the topping is golden brown. 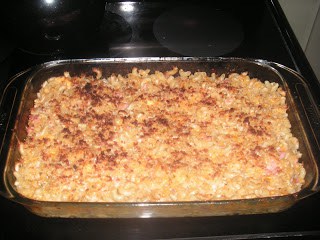 This post linked to:
Not Baaad Sundays﻿, Mommy's Kitchen
Your Recipe, My Kitchen