43 shares
The April 2011 Daring Baker's challenge was hosted by Evelyne of the blog Cheap Ethnic Eatz.  Evelyne chose to challenge everyone to make a maple mousse in an edible container.  Prizes are being awarded to the most creative edible container and filling, o vote on your favorite from April 27th to May 27th at http://thedaringkitchen.com/ !
When I saw what this month's challenge was I wasn't happy.  I don't really like the taste of maple and it is an expensive ingredient to use when I didn't know whether or not I'd eat it.  I debated for about two weeks before I gave in and bought a bottle of organic maple syrup I found at Wal-Mart.  I spent another week agonizing about a container to make.  I wanted to make something with bacon, but I've been a little afraid to use bacon in my baking.  I finally sucked it up and came up with the idea of a brown butter, brown sugar, and bacon cookie container. 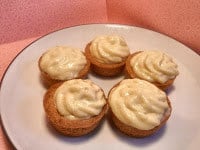 The result was awesome!  I LOVED the cookie containers.  I couldn't believe it.  The bacon is not very noticeable except to a salt taste that pairs so well with the browned butter.  I made the mousse while I was making the cookie containers and was leery of it as well. Turns out that this mousse tastes more of caramel then of maple.  I was thrilled!  Put the two together and I had an out of this world dessert!  My husband thought it was awesome as well and couldn't believe that I had baked with bacon-cookies and bacon are two of his favorites.

Though this recipe is time consuming I'd love to make it again for a dinner party or to take to an event.  The mousse needs to stay cool so it would have to be somewhere that I could take it out of the refrigerator and serve immediately.  Thank you so much for this challenge, it was awesome!
Maple Mousse (recipe from Jaime Oliver is not my Boyfriend)
1 c. pure maple syrup
4 egg yolks
1 package (1 T.) unflavored gelatin
1 ½ c. whipping cream 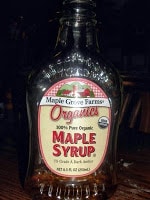 1. In a small saucepan bring the maple syrup to a boil.  Remove from heat.

2.  In a large bowl whisk the egg yolks.  Pour in a small amount of the hot maple syrup while whisking constantly in order to temper the egg yolks.
3.  Add the egg yolks to the hot maple syrup and mix well.
4.  In a small microwave proof bowl pour ¼ c. whipping cream and sprinkle with gelatin.  Let rest for 5 minutes.  Put the bowl in the microwave for 20 seconds.  Remove and stir.  Put it back in for 15 seconds.  Remove and stir until gelatin is dissolved.

5.  Whisk the gelatin mixture into the maple syrup mixture.  Set aside.  Whisk occasionally for the next hour.  (I did this about every 10 minutes)

7.  Remove from refrigerator and put in edible cookie cups.

1.  Heat the butter in a small saute pan over medium high heat until melt.  Stir constantly until the butter is a golden brown and smells nutty.  Remove from heat and put browned butter in a mixing bowl.  Let cool for 10 minutes.

3.  In a small bowl combine flour, salt, and bacon.

4.  Mix the brown sugar with the butter stirring until all the lumps are out.  Add in the egg and vanilla and mix well.  Slowly add in the flour mixture, stirring after each addition.

5.  Roll the dough into quarter sized balls, placing one in each mini muffin cup.  Using a shot glass, dip the flat end of the shot glass into flour then push into the dough forming a cup.  Do this for each dough ball.

6.  Bake for 10 minutes.  Remove from oven and using the shot glass and flour, remake the indentation in each cookie cup.  Bake for an additional 5 minutes.  Let cool on a cooling rack.  Fill with maple mousse. 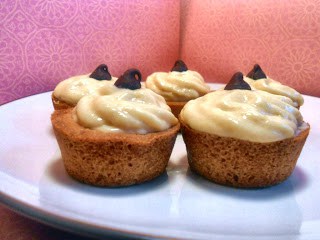 ﻿This post linked to:
What's on Your Plate Wednesdays, Made it on Monday
Real Food Wednesdays, What's Cooking Wednesdays, So Sweet Sundays
It's a Keeper Thursday, Frugal Food Thursdays, Sweets for a Saturday