I had several people I wanted to send homemade gifts to this holiday season. I originally thought of making homemade cookies, but I do that every year. I also feel like around the holidays there are always cookies around. I recalled someone making toffee and went on a search for a good toffee recipe. 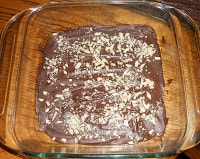 I decided on Martha Stewart’s recipe. It seemed easy enough-boy was I wrong. It took a lot longer to come to temperature then the directions state. Then, I was able to get the toffee out of the cookie sheet pans, but not out of the baking dish. I fought the good fight with the baking dish and the baking dish won. I had to throw out the entire pan because it wouldn’t come out. The other toffee came out greasy on the bottom because of the cookie spray. I was seriously distraught.

However, after letting the toffee dry out for 24 hours, the bottoms dried out and the toffee hardened. It turned out rather tasty. I have to admit that while it took some series effort, the toffee was worth it.   It was great to give as gifts and people told me how much they enjoyed it. Next time I’d make sure I have several types of nuts to sprinkle on the toffee and I’ll use all baking sheets and line them with parchment paper so the bottoms won’t be greasy.

2. In a large saucepan combine butter, sugar, water, and corn syrup. Bring to a boil over high heat stirring with a wooden spoon. Stir an additional 2 minutes. Reduce heat to low and stop stirring. Place a candy thermometer on the side of the pan. 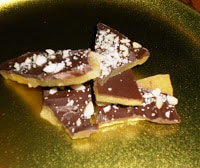 3. Let the mixture come to a boil without stirring. Continue boiling at low heat until the mixture reaches 285 degrees (between 40-60 minutes. It took me 65 minutes). Remove from heat and immediately pour evenly into the prepared pans. Smooth if needed. Let cool for one hour at room temperature.

4. Melt the chocolate almond bark in the microwave heating at 30 second intervals until it’s totally melted. Pour over toffee, spreading with a spatula. Immediately sprinkle with nuts.

5. Let stand for 24 hours. Use a knife to score the toffee pieces or else break into pieces. Store in an airtight container for 3-4 weeks. 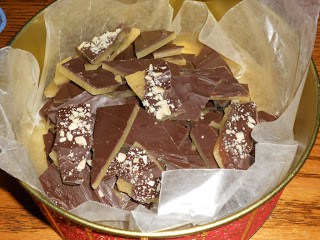