One of my favorite things to eat for breakfast are fruit muffins.  I like using fresh fruit in them and reducing the amount of butter in them so that they are a little healthier.  They are perfect for me in the morning because I'm always in a rush to get out the door and don't have a lot of time for breakfast.  With fruit muffins I feel that I'm eating something semi-healthy but also something quick and delicious. 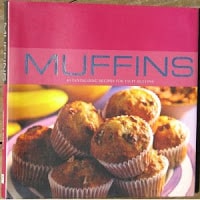 The fruit muffin I make the most is a banana muffin because I often have bananas that I'm trying to use up.  My favorite breakfast fruit muffin is the apple cinnamon.  I recently went on a trip to Canada with my family and we had a 12 hour drive ahead of us.  I wanted to make muffins both for breakfast and as a snack.  I began preparing the mix for banana muffins, then at the last minute divided it in two and ended up making 6 of each muffin.  They were both moist and flavorful.  My family ate half of them for breakfast the first morning and we snacked on them until we were back in the United States.  These muffins are so simple to make and perfect for people who are "on the go". 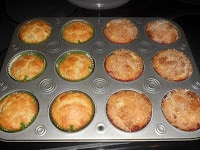 3.  In a medium mixing bowl combine the flour, baking powder, and salt.  Add the wet ingredients to the dry ingredients and stir until just combined.  Split the mixture into two, keeping one in the original mixing bowl and transferring the other half into the bowl used for the wet ingredients.
4.  In one bowl mash a banana.  Add in the nuts (if desired) and sprinkle in the nutmeg.  Stir gently.  Pour into 6 of the muffin cups.

5.  In the other bowl mix the chopped apples and cinnamon.  Stir gently.  Pour into 6 of the muffin cups.

6.  In a small bowl combine the brown sugar and cinnamon.  Sprinkle over the apple cinnamon muffins.

7.  Bake in the oven for 22-25 minutes or until a toothpick stuck in the center comes out clean.  Cool on a cooling rack.