1 shares
I've really been getting into the Chinese cooking lately.  I tried cooking Chinese food years ago and everything I made tasted horrible.  I've recently found a few blogs that have had amazing Asian food on them and I've made a number of dishes that have been as good as or even better then we get at the local Chinese restaurant. 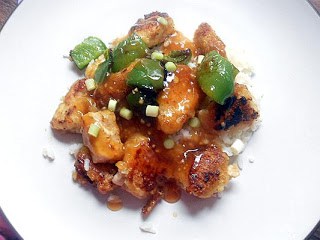 This recipe for orange chicken really spoke to me.  It had crispy, browned chicken pieces in a sweet citrus sauce over top of rice.  It sounded delicious.  I already had eggrolls in the freeze so I was ready to roll.  When I made the marinade it tasted ok but I wasn't too impressed with it.  I was a little worried but continued on with the recipe.  The chicken looked great after it was cooked.  Once the orange sauce was cooked it thickened up and had a fantastic citrus and Asian flavor to it.  The dish didn't taste like the orange chicken I would get at a Chinese restaurant, but it was still really good.  We'll be having this one again! 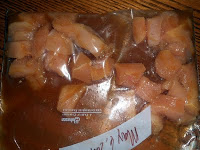 1.  In a medium bowl combine the chicken broth, orange juice, orange zest, vinegar, soy sauce, brown sugar, garlic, ginger, red pepper, and black pepper.  Remove 1 cup of the sauce and place in a freezer bag along with the cut up chicken.  Refrigerate 1-2 hours (no longer).

2.  After marinating the chicken, put the sauce in a saucepan over medium heat.  Bring to a simmer.  In a small bowl whisk the cornstarch and water together until smooth.  Add the cornstarch mixture to the sauce.  Stir to combine.  Cook for 5-10 minutes or until the sauce thickens.  Remove from heat and set aside.

3.  In a small bowl beat the egg whites until they are frothy.  In a second shallow bowl combine the cornstarch, baking soda, red pepper, and salt. 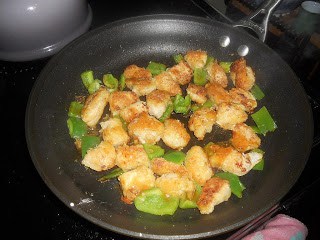 5.  Heat 3 T. olive oil over medium high heat in a large skillet.  Add the chicken coated in the cornstarch.  Immediately coat the remaining chicken with cornstarch and add to pan.  Pan fry the chicken for 5 minutes on each side or until golden brown.  Add remaining oil after turning chicken the first time.

6.  Remove from pan and drain on paper towels.  Remove oil from pan and return the chicken, covering with the orange sauce.  Serve over rice. 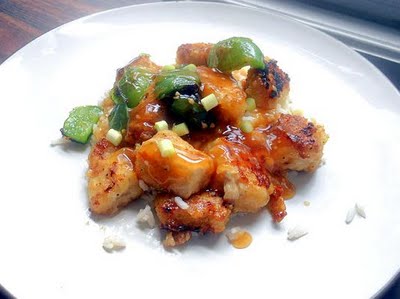