This summer I did a lot of driving down to Cumberland every Thursday to hit up the farmer's market.  While I love the market that's close to my house and I can walk there, the one down in Cumberland has more vendors.  Lately they've also been selling huge baskets full of fruits and vegetables to cooking and baking. 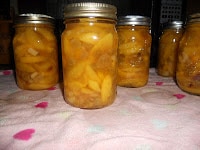 I've been dying to make more of the spiced peach jam I made last year so when a huge basket of peaches was at one of the stands for $10 I couldn't resist.  I got it home and put it on the scale only to find there were 14 pounds of peaches!  Not only did I have enough for peach jam but I had plenty left to make peach pie filling. 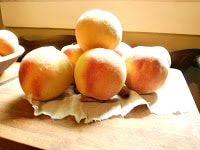 Last year I made apple pie filling and it was great to have on hand all year, especially during the holidays when I was asked to bring something to a party.  Being able to make a quick pie crust and then just open the jar made my life easy.  Plus, the fresh, juicy apple pie filling was amazing.

The peach pie filling was a little harder for me to make.  I had difficulty getting the peaches peeled.  Usually when I put them in hot water I don't have a problem but this time I had trouble with about half the peaches.  Once they were done I stuck them in a pot along with chopped apples, raisins, and tons of spices.  The filling smelled so good, it was hard not to sneak a taste.

After filling my jars there was a little of the filling left so I had a taste.  The fresh, juicy peach taste was sweet and refreshing.  The spices really came through as well.

This past weekend we had friends coming over for a mini Thanksgiving dinner and I needed a dessert to end the meal.  I remembered the peach pie filling I had canned in the summer and wanted to make a peach pie for dessert.   This was great because making a pie was also the theme for this months What's Baking challenge hosted by Kim at Just Baked.

The pie was delicious.  The crust was buttery and flaky.  The filling was sweet, spiced, and juicy.  It's so nice to have fresh peach pie filling available throughout the year.  Our friends were really impressed by the taste of the pie as well.

2.  Tie the cinnamon stick pieces and cloves in a square of cheesecloth and tie, creating a spice bag. 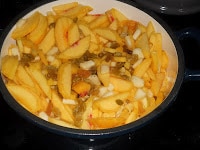 4.  Ladle the hot pie filling into hot jars, leaving 1 inch headspace.  Remove the air bubbles and adjust the headspace.  Wipe the rims of the jars and place the lid on top.  Tighten the screw band to fingertip tight.

5.  Place the jars in the boiling water canner and cover with the lid.  Process for 15 minutes.   Remove canner from heat and let sit for 5 minutes.  Remove the jars and let cool for 24 hours.  Check the seal and then store in a cool place for up to 1 year. 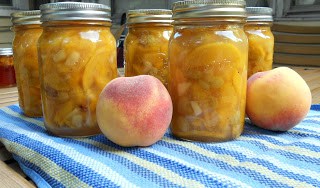 2.  Unroll the pie crust into a pie pan.  Crimp the edges into a pretty pattern.

3.  Melt the butter in the microwave.  Stir 1 tablespoon of sugar and half the cinnamon into the butter.  Brush the butter mixture onto the edges of the pie crust.

4.  Pour the peach pie filling into the crust and sprinkle with remaining sugar and cinnamon.

5.  Bake for 20-30 minutes or until the crust is golden brown and the peach filling is bubbly.  Cool on a wire rack. 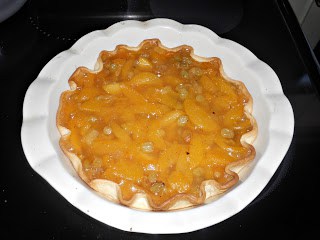