I've really been looking forward to making apple butter.  I've never done it before but I absolutely love the taste of it.  I can't wait for fall so I can go and buy a huge basket of apples to use to make apple butter, apple pie, etc.  But, it's not yet apple season so I've been looking for something else to make.  Lately I've seen several posts on pear butter. 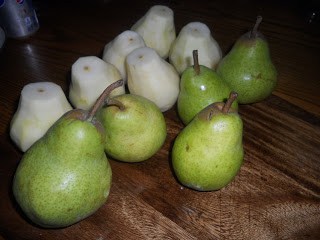 Now pears have never been a favorite of mine.  I don't mind them, but they aren't something I normally pick up at the market.  But the pictures of the pear butter I've been seeing made me want to rush right out and get some...so I did.  It was a couple hour process but I got the pear butter made.  I'm glad I chose the recipe that I did because it adds in ginger, nutmeg, and cinnamon as the spices which really bring a nice flavor to the pear butter.  It also adds in a little vanilla which gives it a nice depth.

I wasn't sure if I'd like it as much as the apple butter, but this version of pear butter is clearly a winner.  I put it on toast the morning after I ate it and it was delicious.  Sweet and spicy with hints of vanilla this was certainly a surprising treat that I'll get to enjoy year round. 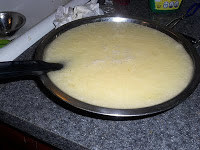 1.  In a large pot over medium high heat place the chopped pears and ginger.  Add the water and lemon juice.  Bring to a boil, reduce the heat, and cook for 20 minutes.

2.  Remove from heat and ladle the mixture, liquid and all, into a food processor and process for 30 seconds.  Measure the pear puree and place back in the large pot. For every cup of pear puree you measured, add ½ cup of sugar.  I ended up with 8 cups of puree so I added 4 cups of sugar.  Stir in the cinnamon, nutmeg, and half of the vanilla.
3.  Cook on medium heat stirring every few minutes to keep from sticking to the bowl.  Cook for 45 minutes-1 hour or until the mixture has thickened to the consistency you desire. 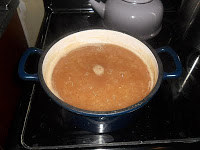 4.  Remove from heat and stir in remaining vanilla.  Ladle the pear butter into half pint jars that have been prepared, leaving ¼ inch of headspace in each jar.  Remove air bubbles and adjust headspace.  Wipe the rims, place the lid on, and tighten the screwband to fingertip tight.  Put in a boiling water canner for 10 minutes.

5.  Remove the jars and let sit for 12 hours then check the seals.  Store in a cool, dry place.

Makes 7 half pints of pear butter. 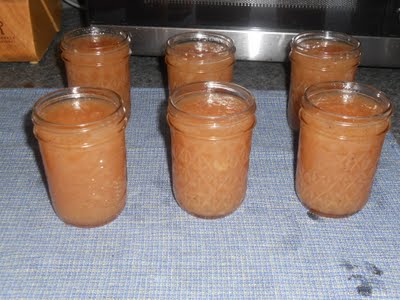