Flavors of Fall Week is sponsored by Millican Pecan and Door County Coffee but all opinions are 100% my own.

I drink coffee all year long.  I used to laugh at people who would drink hot coffee in the summer until I became that person.   About ten years ago I would start drinking hot coffee several days a week in the summer without it bothering me too much.  Since J has come along you better believe I'm having a cup of coffee or a hot latte every single morning in order to get me up and going.

Now that fall is here I've been thinking about all the fun fall flavors and have been trying to come up with a new fall latte flavor.  You all know I love my coffee machine since it froths milk and has a strong brew option to make espresso like coffee.   We've tried out so many different flavored lattes over the last few months but this is the first fall we've had this machine.

After checking out what I had available I came up with a Pecan Spice Latte.  Think cinnamon spiced coffee and cinnamon pecan milk all topped off with whipped cream and cinnamon pecans.   Do I have your attention now?   This awesome creation takes a little bit of planning since the milk has to sit but I've been tripling the recipe and just leaving the cinnamon pecan milk in the refrigerator to use for several days in a row.

I started this latte off by chopping up Millican Cinnamon Candied Pecans and putting them in the milk.   I then let this mixture sit for 30 minutes to an hour and then strained out the pecans.  The resulting milk is cinnamon spiced and has a lovely pecan flavor.  I think heat up the milk and froth it to perfection.

Next you need to do a strong brew of a spiced coffee.  I used Door County Coffee Autumn Spice which is full of spicy cinnamon.  After it's brewed I mix in the brown sugar and then top it off with the milk.  The result is a velvety spiced latte.   After that you can top it however you want but I recommend you do whipped cream, cinnamon, and a few Millican Cinnamon Candied Pecans. 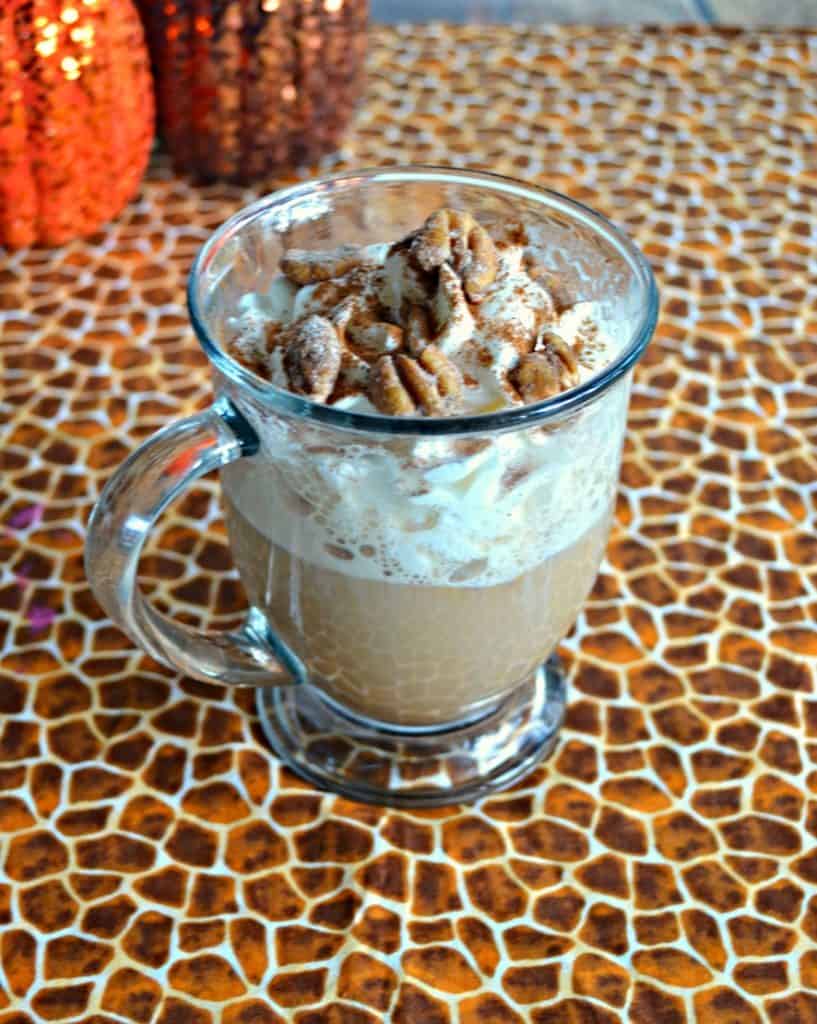 This is one of those lattes that smells and tastes like fall.  It's perfect to drink on a cool fall morning because the spices warm me right up. 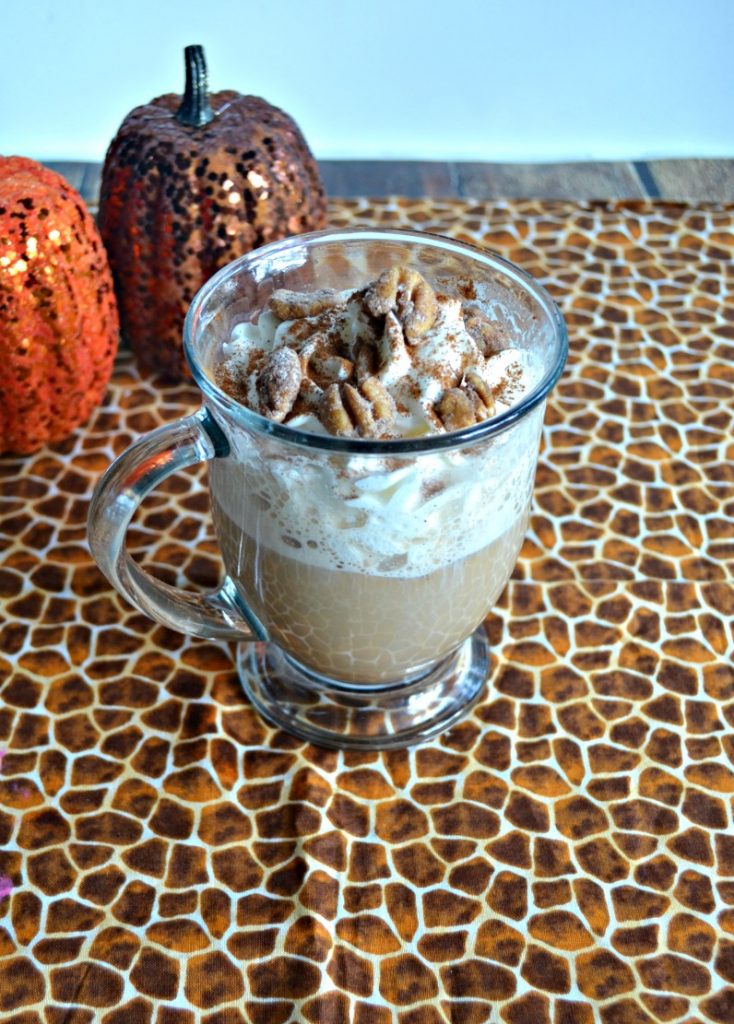 Welcome to Flavors of Fall where we celebrate all things associated with fall like squash, apples, pecans, sweaters, football; you get the idea!  Ellen from Family Around the Table and Christie from A Kitchen Hoor’s Adventures have gathered 24 bloggers who have over 100 recipes they’re sharing this week in celebration of cool weather and sweatshirts.  We hope you find many must make recipes so get your pinning, tweeting, and sharing fingers ready!

Here’s what we made for Wednesday: 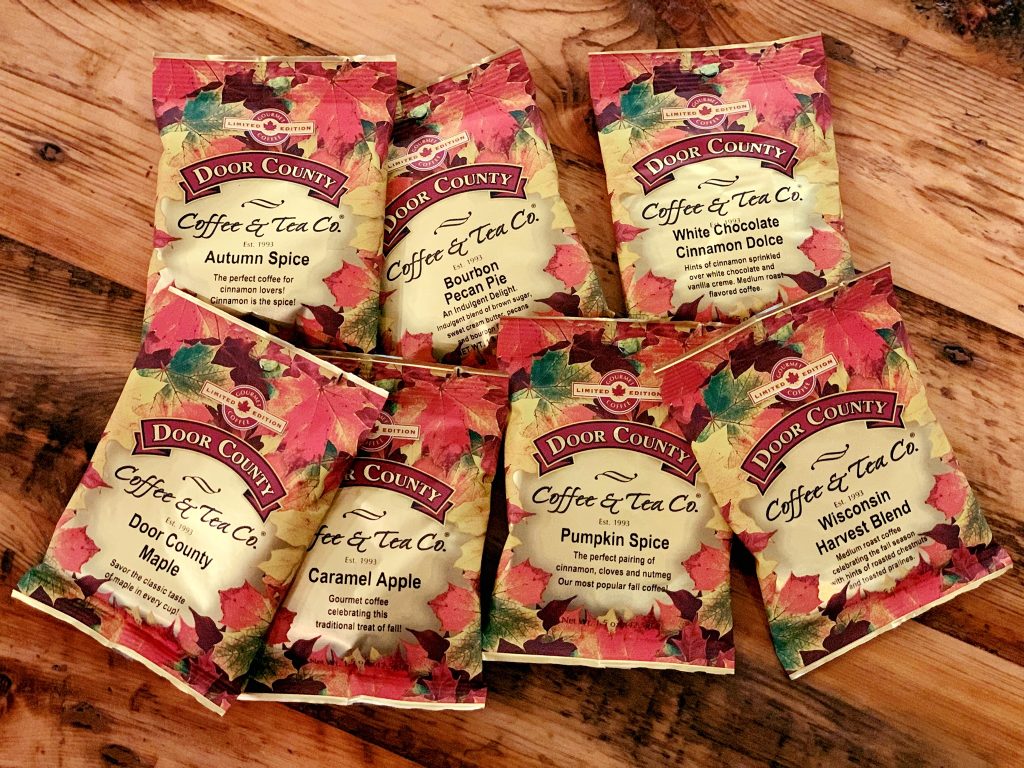 Founded in 1993 in Door County, WI, Door County Coffee and Tea Company is a small family owned business. Roasting a variety of flavors for 26 years, one winner will receive three full pot bags of all of their fall flavors. 21 bags in all! Their mission through the years has been to produce high quality, best-tasting coffee using only Specialty Class 1 Arabica coffee beans. Combine that with superior roasting technology and you get a wonderfully even and perfect roast every time and that means the perfect pot of coffee. A $40 value.

Originally founded as the West Texas Pecan Nursery in the late 1800's, Millican Pecan is now in 5th generation ownership. Located in San Saba, TX, the family continues the tradition of pecan farming while also branching the business into the online world. The family also enjoys educating people about pecans. One winner will receive The Tower of Treats Gift Tins. The tower includes 3 decorative gift tins stacked on top of each other. The bottom tin includes our 2 lb. Chocolate Pecan Sampler, the middle tin is our Flavored Pecan Sampler and the top tin is a 8 oz. tin of Milk Chocolate Caramillicans (similar to Turtles). An $80 value.

Two (2) winners will be selected. The prize packages will be sent directly from the giveaway sponsors. Bloggers are not responsible for prize fulfillment. Winners have 24 hours to respond once notified by email, or they forfeit the prize and an alternate winner will be chosen. The #FallFlavors bloggers are not responsible for the fulfillment or delivery of the prize packages. Bloggers hosting this giveaway and their immediate family members living in the household cannot enter or win the giveaway. Entries will be verified. No purchase necessary. Void where prohibited by law. Must be 18 years of age or older to enter giveaway. This promotion is in no way sponsored, endorsed, administered by, or associated with Facebook, Instagram, Pinterest, Twitter or any other social channel mentioned in the #FallFlavors posts or entry. Thank you to our sponsors Millican Pecan and Door County Coffee and Tea for providing prizes.