Have you ever tried Pork Adobo?  It's the national dish of the Philippines and it's delicious!  Basically it's a piece of poultry, in this case pork, braised in a seasoned vinegar until it's tender.  It is bursting with flavor and has less then 10 ingredients!  Plus it's really easy to make and most of the time it takes is simmering on the stove. 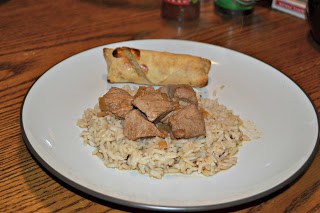 This recipe called for 12 cloves of garlic but I only had 5 so I substituted a large shallot as well and I thought it added a nice flavor.  The other change I was made was in the cooking method.  Instead of braising it, then frying the pork, then putting it all together I simply put it all in one pot and cooked it.   Served over rice it is packed with flavor.

2.  Pour the pork mixture, along with 2 cups water, in a large sauce pan.  Heat over medium high heat and bring to a boil.  Then reduce heat and simmer for 30 minutes, stirring occasionally. 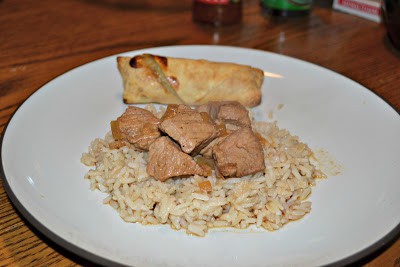