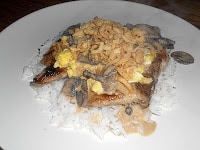 A few months ago I saw a picture of a crazy looking pork chop dish that was appropriately named Pork Chops Loco Moco.  It was a combination of several different foods and while it sounded odd it looked delicious.  I put the pork chops on my menu plan 3 weeks ago and just finally got around to making them this past week.  Because of all the different parts to this recipe I assumed it would take me forever to make it, but it was ready in about 40 minutes.

The dish starts with a bed of white rice.  The rice is then topped with a browned, bone in pork chop.  On top of that goes scrambled eggs.  Then you pour on an Asian inspired mushroom sauce and top off the entire dish with fried onions.  It sounds like a lot but in the end I absolutely loved it!  The combination of flavors worked so well together in this “loco” dish.  There is a ton of food in each portion so 1 pork chop with rice was plenty for dinner.  This would be a great meal to make for entertaining because it’s unique, it looks impressive, it can be put together in less than an hour, and the flavors work so well together.

1. Heat the 2 cups of water in a medium saucepan to boiling. Add in the rice and salt and stir. Place the lid on top of the saucepan, reduce heat to low, and simmer for 20 minutes. 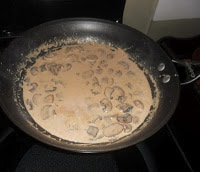 2. In a small bowl combine the cornstarch and 1 teaspoon of water. Set aside.

3. Heat the vegetable oil in a large skillet over medium high heat. Stir in the mushrooms and cook for 5 minutes or until they begin to brown. Stir in the half and half, soy sauce, and oyster sauce. Cook while whisking until the sauce boils. Boil for 1 minute or until the sauce thickens. Remove from heat and stir in black pepper and red pepper. Pour the sauce into a liquid measuring cup, cover with plastic wrap, and set aside.

4. Wipe out the large skillet that you used to make the sauce in. Add the butter to the pan and heat over medium high heat until it foams.

5. In a small bowl beat the eggs then add the milk and black pepper. Beat until well combined. Pour the eggs into the skillet. Using a skillet push the eggs from one side of the pan to the other, lifting and folding until the eggs are cooked and clumped into a single mound, about 3 minutes. Put in a medium bowl and cover with plastic wrap. 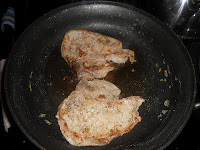 6. Wipe out the skillet with a clean paper towel. Add the olive oil and heat over medium high heat until smoking. Season the pork chops with salt and pepper.

7. Lay the pork chop in the skillet and cook for 4-5 minutes or until golden brown. Flip over and brown the other side for 4-5 minutes. Remove from pan.

8. To serve divide the rice among four plates. Lay a browned pork chop on top of the rice. Spoon a tablespoon of scrambled eggs on top of the pork chops. Pour a few tablespoons of sauce over the egg and pork chops then top with the fried onions. Serve hot. 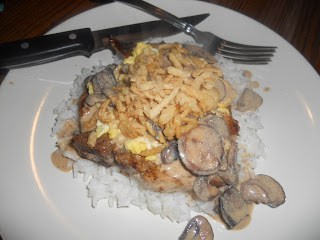 This post linked to:
Tempt My Tummy Tuesday, Made From Scratch Tuesdays, Totally Tasty Tuesdays﻿