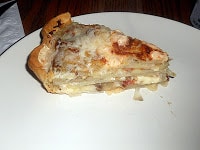 I was a little bit worried about this month's Secret Recipe Club reveal date.  I had a lot going on around Thanksgiving and December is always extremely busy so I wasn't sure how I was going to find the time this month, but of course I managed.   The blog I had to choose from this month was Fifteen Spatulas which is written by Joanne.  She has a fabulous blog with a ton of delicious looking recipes.  A few that I've marked to make later are her Bourbon Butterscotch Brownies, Lavender Shortbread Cookies, and the Salted Caramel Tart.

While I wanted to make one of her yummy desserts, I decided to go with a savory dish since this month will be filled with cookie making.  Of course, once I decided on a savory dish I immediately went to the pasta and potatoes section.  I came across a potato tart with bacon and cheese that looked interesting.

Peeling and slicing the potatoes took forever.  If you have a food processor that slices or a mandolin, I suggest you use it for this.  The potatoes need to be very thinly sliced.  In addition to the gruyere cheese I added in some mozzarella too.  I also sauteed a few onions with some garlic and added it to the dish as well.  The result was really tasty.  The potatoes on top were crispy and the dish was cheesy and delicious.  I liked the way the pie crust kept it all together and made it easy to serve.  This would be a great dish to make for company. 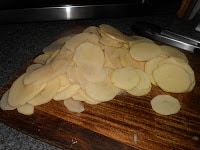 1. Cook the bacon in a skillet over medium high heat until it is crispy. Remove from pan and drain on a paper towel. Allow to cool and then crumble and set aside.

2. Preheat the oven to 375 degrees. Put the pie crust into a pie pan and flute the edges. 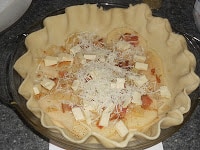 3. Remove all but 2 teaspoons of bacon drippings from the skillet. Return the skillet to medium heat and add in the onions, cooking for 5-7 minutes. Add in the garlic and cook for an additional minute. Remove from heat.
4. Slice the potatoes into ⅛ inch slices. Line the bottom of the pie crust with a layer of potatoes. Sprinkle with salt, pepper, and rosemary. Sprinkle 1 tablespoon of bacon, 2 tablespoons of both the Gruyere and mozzarella, and 2 tablespoons of the onion mixture.

5. Repeat 3 more times, until there are 4 layers of potatoes. Drizzle the olive oil on top of the potatoes.

6. Bake for 45 minutes to 1 hour or until the potatoes are golden brown. Remove from oven and allow to cool 5 minutes before cutting. Serve while hot. 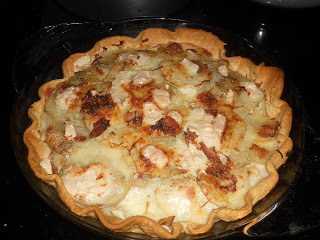 ﻿This post linked to:
Mangia Monday, Making You Crave Monday , Made From Scratch Tuesdays,
Tuesdays at the Table