Princess Cupcake Jones, the modern-day princess who loves her tutu and playing with her toys, is about to begin school . . . but says, "I won't go!" Cupcake tries everything to avoid her first day—from pretending to be sick to even hiding! However, Mom stays one step ahead of her. Only after arriving at school and meeting a new friend does Cupcake realize that school might not be as scary as she thought. The book features a special word ("love") hidden in each illustration.  (-synopsis) 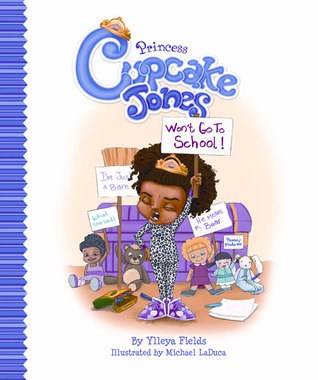 Princess Cupcake Jones is getting ready for her first day of school.  She thought it would be fun until the day actually comes.   Suddenly Cupcake tries to figure out a way to stay home.   Can she pretend she is sick?   Say she doesn't have the right clothes?  Anything to not go to school!

But her mother, the queen, sees right through her tricks and takes her to school.  As Princess Cupcakes stands nervously waiting to go into the room she finds a very special friend who helps her fit in.

This is a charming children's book about Princess Cupcake, a girl who is nervous to go to school.  The book is written in rhymes which gives it a fun sing-song quality that children will enjoy.  The illustrations are bright and eye catching and the story is engaging.