This past weekend was my 10 year reunion at West Virginia Wesleyan College.  It's been about 7 years since I've been back to the campus and I was heading down with my best friends from college.  We were having a girl's only weekend so I knew it would be fun but I also knew it was going to be different then when we were in school. 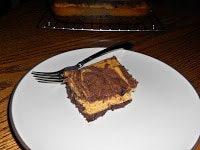 It ended up being a blast and seeing so many people I haven't seen in years was really great.  The buildings on campus looked a little more run down but the chapel at the center of the school is still gorgeous.  Even though I'm only in my early 30's I felt really old being down on campus again and I'm sad to say that while I aged the freshman certainly didn't.

For the weekend trip I knew my girls and I were going to need some serious fuel to keep us awake past 10 o'clock.  I was planning on something chocolate but I wanted to make it something that had meaning.  Since it is the fall and our school colors are orange and black I went with pumpkin cheesecake brownies.

These were like crack in a brownie!  The rich, chocolate brownie layer tasted like fudge and on top of it sat a dense pumpkin cheesecake.  Every bite was sweet, spiced, and filled with pumpkin goodness.  I could have eaten the entire pan myself and once my friends had a bite they felt the same way. 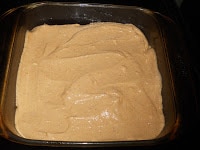 2.  In a large mixing bowl combine the melted butter, sugar, and vanilla.  Beat in eggs one at a time until totally incorporated.

4.  Slowly mix the dry ingredients into the butter mixture.  Pour ⅔ of the batter into the prepared pan.  Set the rest aside. 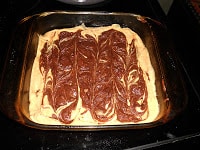 5.  In a large bowl beat the cream cheese with a mixer on medium speed.  Add in the egg and beat well.  Mix in the remaining ingredients and mix until smooth.

7.  Bake for 40-45 minutes or until the center is set.  Cool on a wire rack and chill before serving. 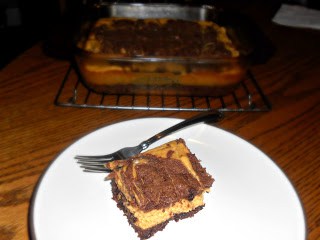