I'm not sure why there is so much hype over red velvet cake.  I mean, if it was the only cake at a party I'd eat it, but if there were other choices I'd most likely go for something else.  Is it the deep red color, the texture, or the subtle chocolate flavor?  I have no idea why there is such a craze over the red velvet cake but whatever the reason, my cousin has red velvet cake fever too. 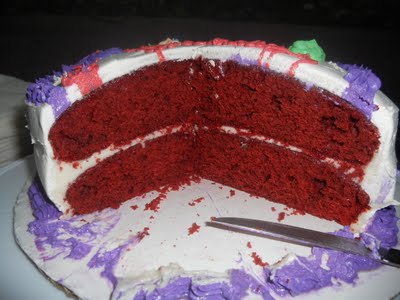 This cake was easy to prepare and bake.  It turned out moist and delicious.  The cake was a bright red and had a light chocolate flavor to it.  The cream cheese frosting was rich and creamy.  The layer cake was easy to make and decorate.  My cousin loved her cake and it was a huge success at her birthday party.
Red Velvet Layer Cake with Cream Cheese Frosting (adapted from I Was Born to Cook) 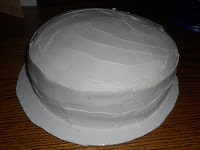 1.  Preheat the oven to 350 degrees.  Grease two 8 inch round pans with softened butter.  Put parchment paper on the bottom of both pans and set aside.

2.  In a medium bowl combine the flour, salt, and cocoa powder.

3.  In a large mixing bowl cream the butter and sugar until fluffy.  Add the eggs and beat well.  Add in the vanilla and mix.

4.  In a bowl whisk the milk and food coloring.  Alternate mixing the milk and flour into the butter mixture, beginning and ending with the flour. 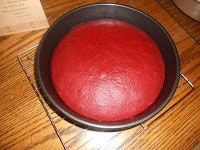 5.  In a small bowl combine the vinegar and baking soda.  Let it fizz and then fold into the cake batter.  Divide the batter in between the two pans and put in the oven.  Bake for 30 minutes or until a toothpick inserted in the center comes out clean. 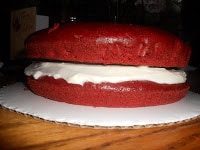 6. Put the cakes on a cooling rack and let cool completely.  Remove from pans.

7.  In a large bowl combine cream cheese, butter, and vanilla.  Mix with a hand mixer.  Add in the powdered sugar 1 cup at a time until thick and smooth.

8.  Put one cake layer on a cake board.  Spread cream cheese icing on the top.  Place the second layer on top of the first.  Cover the entire cake with cream cheese frosting.  Decorate and then refrigerate. 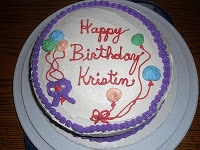