Normal is overrated After his latest fight, Jason Champion is sent to a rundown alternative school, nicknamed "Reject High." Fine by him, except a girl named Cherish died there under strange circumstances. . . Cherish's only friend, Rhapsody Lowe, shows him a crystal that turns her invisible. Jason tries one on and he jumps over a city. Their classmates, Sasha and Selby, see Jason and Rhapsody in action and receive crystals of their own. They keep a low profile until Jason discovers they are being studied by people they trust. With eleven days until Reject High is destroyed, Jason and his friends must dodge their pursuers, solve the mystery of Cherish's death, and save their power source from falling into the wrong hands. The first installment in a multi-book series, Reject High combines engaging characters inside of a page-turning, breathtaking adventure.  (-synopsis) 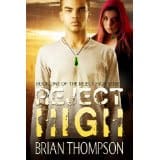 Reject High is an alternative school for high school students who have been kicked out of their home school.   Only the worst students go here.   Jason's first day at Reject High starts out in the girl's bathroom.   He follows a girl named Rhapsody into the bathrooms and learns a little about the school.  When a staff member comes in to find the pair, he doesn't see them.   Jason soon learns that there is something different about Rhapsody.   She wears a crystal around her neck and she can turn invisible.

Later that day Jason and Rhapsody get dungeon duty and find the source of the crystals.   Jason takes one and puts it around his neck.  Later that day he's in a horrible car accident with his step-mother.  He manages to get her out but when he almost gets hit by a car he jumps...and lands 30 miles away.   It seems that the crystal allows him to jump long distances.

Soon the pair are being tested by several teachers who know about their superpowers.   The teachers want to find the source of the crystals and will stop at nothing to get it.   Soon it's up to Jason to figure out how to get the crystal source away from the teachers and put it somewhere safe.   He struggles to do what is needed while keeping his step-mother, brother, and friends safe.

This is a great book about students who have behavior problems working together to help each other.   They just happen to have superpowers.   I thought it was really interesting to see how the students interact with each other throughout the book.  I thought it was very realistic.   I also enjoyed the interactions between Jason and his step-mother.

Reject High is a fast paced action packed novel for young adults.    I think most teenagers would enjoy this book.