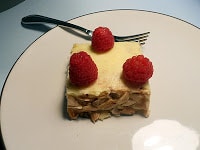 When I first read how to make this cake I was more then a little confused.  The recipe was for a meringue with layers of buttercream in between.  I have to admit that I didn't think it sounded appetzing at all.  The recipe itself didn't look like it would be too hard to make but it was time consuming.  After racking my brain I decided to make a lemon flavored buttercream and top my cake with raspberries.
The original recipe calls for toasted cashews but I have to admit I really don't like nuts at all.  Seeing that there was a large amount of nuts in the sans rival I knew I'd have to put some type of nut in and really the only nut I even partially like is an almond so I substituted those in.  I cooked the sans rival in two batches in order to make all four layers.  I was able to make them in quarter sheet pans and get a nice thin layer.  The sans rival was actually very good.  It was crisp on the edges and chewy in the middle with a faint flavor of nuts. 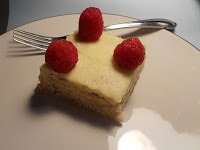 It turns out the buttercream is a French buttercream which is nothing like the Americanized version that I normally make.  The French buttercream is so much better.  It's made with eggs, sugar, butter, and flavorings which makes it fluffy and not overly sweet like American buttercream.  I loved it and plan on using this to top my cupcakes with from now on.  I flavored it with lemon extract and lemon zest which gave it a nice tartness.

Layering the cakes and buttercream wasn't as difficult as I would have thought.  It came together quickly.  The hardest part for me was getting the nuts to stick on the sides.  I wrapped the entire thing in plastic wrap and refrigerated it.  Two days later I served it as dessert after and Asian inspired meal.  Everyone loved it.  The nutty sans rival and the lemony buttercream worked perfectly together and were offset by the tart raspberries on top.  Not only did it taste good but it was beautiful and impressive as well.  I'd like to try making it again with different flavored buttercreams. 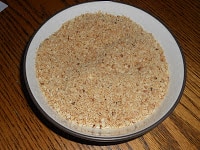 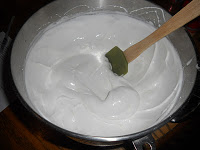 3.  In a large mixing bowl beat the egg whites on medium until foamy (about 2 minutes).  Sprinkle with the cream of tartar.  Gradually add in the sugar, a couple of tablespoons at a time, beating at high speed now.  Continue beating at high for 7-10 minutes or until stiff, shiny peaks form.
4.  Fold in the toasted, chops almonds, reserving a handful for decoration.
5.  Divide the meringue into 4 each parts and spread one part in each of the pans.  Try to make it as even as possible, spreading to the edge of the pans. 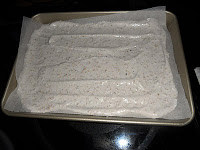 6.  Baked for 30 minutes or until golden brown.  Remove the meringue from the baking pans while still hot.  Allow to cool for 2-4 minutes and then remove the parchment paper.  Allow meringue to cool completely.
7.  Line the pans with new parchment paper and repeat the process.  When all 4 meringues are cool, trim the edges so all are uniformly shaped.  Set aside. 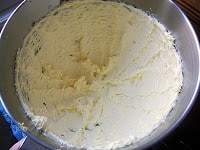 1.  Put the egg yolks in a mixing bowl and beat on high until the have doubled and are lemony yellow in color.

2.  Put the sugar and water in a heavy saucepan and cook over medium heat.  Continue cooking and stirring until the syrup reaches 235 degrees.

3.  With the mixer on high, very slowly and carefully pour the syrup down the sides of the bowl, until it has all been added.  Continue beating on high until the mixture is at room temperature (about 10 minutes).
4.  Keeping the mixer on high, add in the butter a tablespoon at a time.  Add in the vanilla, lemon extract, and lemon zest and beat for another minute.

2.  Spread buttercream on the top of the cake and around the sides.  Immediately push the reserved almonds into the sides of the cake or decoration.  Refrigerate for at least 2 hours or up to 3 days before serving.

3.  When ready to serve pull the Sans Rival Cake from the refrigerate and cut gently with a serrated knife.  Top each piece with raspberries and serve. 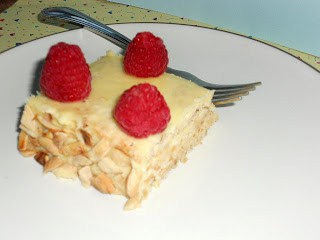 This post linked to:
Not Baad Sundays, Sundae Scoop Sundays, Your Recipe, My Kitchen