Have you ever been to an un-birthday party?  A few years ago my parents started a tradition of having an un-birthday party in September.  Everyone in my family goes to my parents for one last pool party, we have dinner, there's desserts, and everyone gets a present.  It's a grab bag and everyone brings a gift and gets a gift.  This year I received a gallon jug of Sonny's Bar-B-Que sauce as my gift.  I love Sonny's sauce so this was perfect for me.  My husband received after shave lotion which is something he does use so it was a practical gift for him. 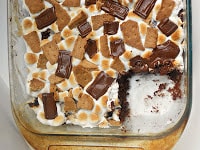 My parents provided all of the food for the party so I told them I would bring all of the desserts.  I already knew I wanted to bring an apple dessert and a pumpkin dessert.  I figured I better bring a chocolate dessert as well.  I've been dying to make S'mores brownies ever since I saw a picture of them and figured this would be a great place to bring them.

Making these brownies seemed easy enough.  They are a basic brownie topped with marshmallows then sprinkled with graham crackers and Hershey bars.  When I put the brownies in the oven to broil I left them in for the required 30 seconds.  When I opened the oven I was in for a surprise-the entire pan of brownies was engulfed in flames!  I panicked for a few seconds and then slipped on my oven mitts and pulled the pan out. Lucky for me the flames died as soon as the brownies were out of the oven. 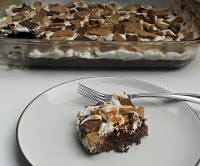 Using quick thinking I scraped the burned to a crisp marshmallows off the top, put new marshmallows on top, and then put them back in the oven.  This time I broiled them on the bottom shelf.  That seemed to work and the marshmallows turned golden brown.  When I pulled them out I sprinkled the graham crackers and then topped them with Hershey bars.  They ended up looking beautiful and tasting amazing.  I still can't believe I was able to safe them from the flames!  These were a big hit at the party and the kids especially loved them.

2.  In a medium bowl combine the flour, salt, and baking powder.  Mix well. 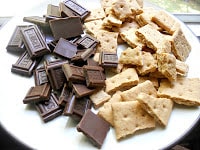 3.  In a large bowl cream the butter and sugar.  Add in the applesauce and mix well.  Add in the eggs one at a time, stirring well after each addition.  Mix in the vanilla.

5.  Pour the brownies into the prepared pan and bake for 30-35 minutes or until a toothpick inserted in the center comes out clean.

7.  Broil the brownies at least 6 inches from the heat source for 30 seconds, watching carefully so they do not catch on fire!

8.  When the marshmallows are golden brown remove from the oven and top with the Hershey bar pieces.  Allow to cool on a wire rack. 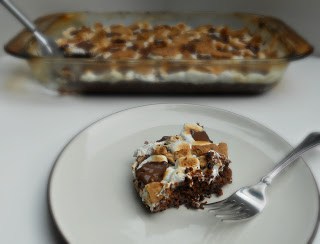