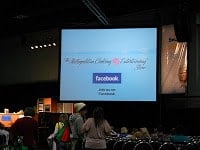 This past weekend my nieces invited me to go with them to the Metropolitan Cooking and Entertaining Show in Washington, DC.  I was extremely excited to go because there were over 300 vendors, samples of products, and appearances by Food Network Stars.  We were lucky enough to get tickets to see Paula Deen live! 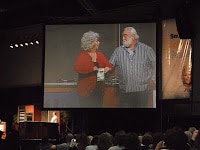 Paula Deen is hilarious.  She was only supposed to be on stage for an hour, but stayed for an hour and a half.  Her husband Michael was there as well.  He ended up doing much of the cooking with sous chef Glen while Paula entertained the audience and answered questions.  I found it very inspiring that Paula never really cooked until she was 18 and didn't start cooking professionally until she was 42. 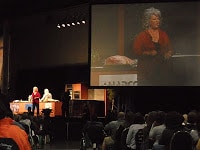 During her time on stage she made a glazed ham, stuffing (or dressing as she called it), and gooey pumpkin butter cake.  Everything looked delicious, but it was how real Paula was that made the event for me.  She shared some very personal stories and interacted with various people in the audience.  She spoke about her grandmother being her inspiration, about her sons style of cooking, and even told us a story of how she came to adopt her cat Pumpkin.

We even had two surprise guests visit during the show!  Jill Biden stopped by with a message for the spouses of soldiers who were spending the day at the show, and Paula's cousin Johnnie stopped by as well!  Johnnie had a booth set up with baked goods from her amazing bakery Gabriel's (more on that in another post). 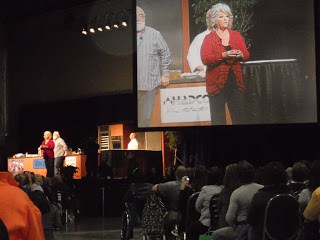 After the show we bolted to the bookstore and ended up buying the last three signed copies of Paula's cookbook The Deen Family Cookbook.  I cannot wait to start cooking from this book.  However, in the days leading up to the show I browsed some Paula Deen recipes online and made her Lowcountry Smothered Pork Chops for dinner tonight.

I really wasn't too sure how this recipe would turn out as it didn't seem to incorporate nearly enough butter for a Paula Deen recipe.  It did, however, turn out wonderfully.  The combination of tender pork chops, sauteed vegetables, and the smothered sauce was really delicious.  I could totally picture the Deen family sitting down to Sunday supper with this meal.  The Worcestershire sauce adds a nice hint of flavor to the rest of the dish and the chicken broth reduces down to almost a gravy.  We ended up putting the leftover gravy on rolls!  Delicious!

1.  Trim fat from chops and season with salt and peppers.

2.  Melt the butter in a skillet over medium heat.  Dredge the pork chops in the flour, shaking off the excess, and put them into the pan.  Brown well, about 3 minutes per side, and remove to a plate. 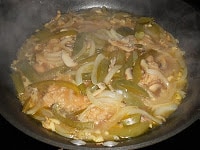 3.  Add the pepper and onion to the skillet and saute to softened, about 3 minutes.  Add in the mushrooms and cook an additional 2-3 minutes.  Stir in the garlic and cook about a minute.  Push the vegetables to the side and add the chops to the center.  Put the vegetables on top of the pork chops.
4.  Pour in the chicken broth and sprinkle with the Worcestshire sauce.  Turn the heat to low, cover with foil and simmer for 35 minutes. 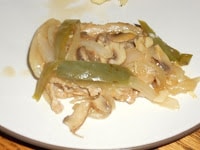 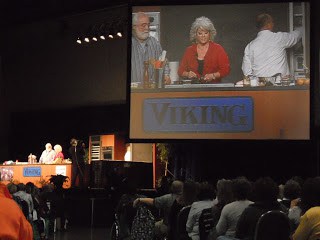