This month Jaida, from Sweet Beginnings, is the host of our What's Baking? challenge.  She chose to have us bake scones this month!   Now I've made several scones in the past, both sweet and savory.   My two favorites were the Cranberry Orange scones and the Herb scones.  When Jaida first announced the challenge I had a ton of ideas but this was a busy month and I waited until the last minute. 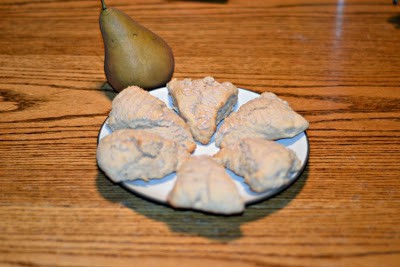 Wednesday night I was running around the kitchen looking for something to use in my scones.  My eyes landed on the nice, juicy pears I just bought and I knew they had to go in the scones!  I spiced up the dough with cinnamon, cardamom, and ginger to give it a fall flavor then baked them in the oven. 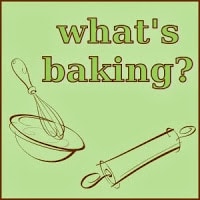 I'm pretty sure these are the best scones I've ever eaten!  Seriously.  They weren't heavy and dense like many of my scones are.  They were crunchy on the outside but surprisingly soft and fluffy on the inside.  The pears added a sweetness and the spices really came through.  The best part was the cinnamon drizzle on top! 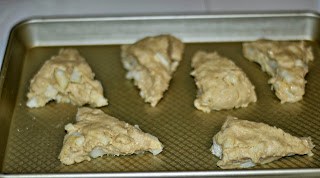 2.  In a medium bowl cream the butter and brown sugar.  Add in the egg and mix well.  Stir in the vanilla, cinnamon, ginger, and cardamom.

3.   In a small bowl combine the flour, baking powder, and salt.  Add half of the flour mixture to the sugar mixture and mix well.

4.  Add the milk to the mixture and mix well.  Add in the remaining flour and mix until a soft dough forms.  Gently stir in the pears.

5.  Form the dough into a ball.  Place on a cutting board and flatten into a disc shape about ¾ inch thick.

6.  Using a pizza cutter, slice into 10 or 12 wedges.  Place the wedges on a baking sheet and bake for 18-20 minutes or until the bottoms are golden brown.  Remove from oven and cool.

7.  In a bowl combine the powdered sugar, milk, and cinnamon.  Mix well.  Drizzle over top of the cooled scones. 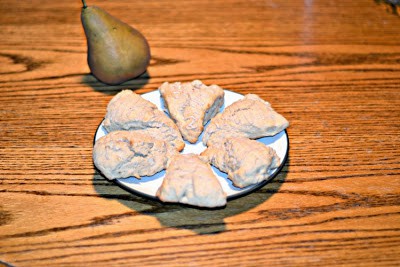